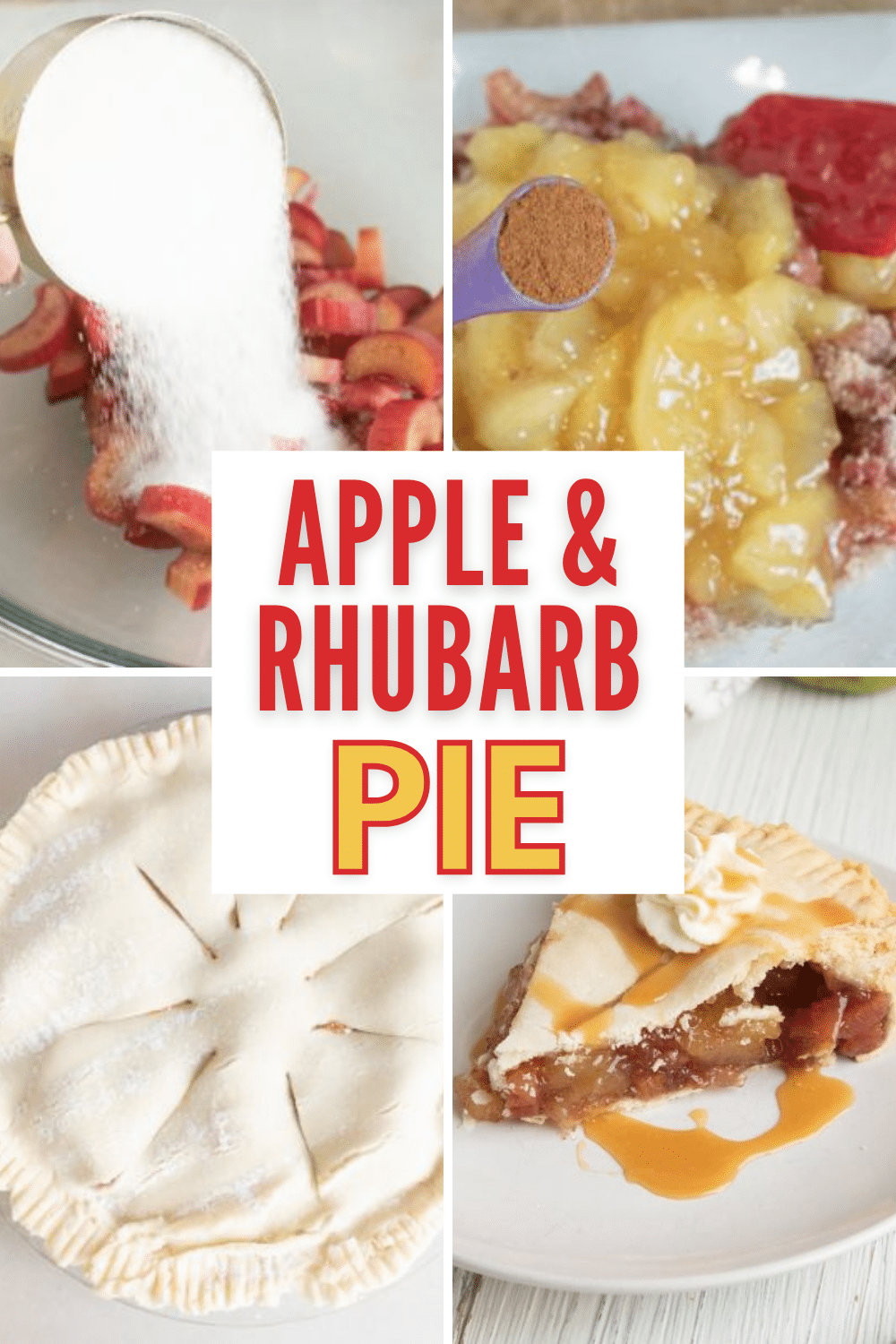 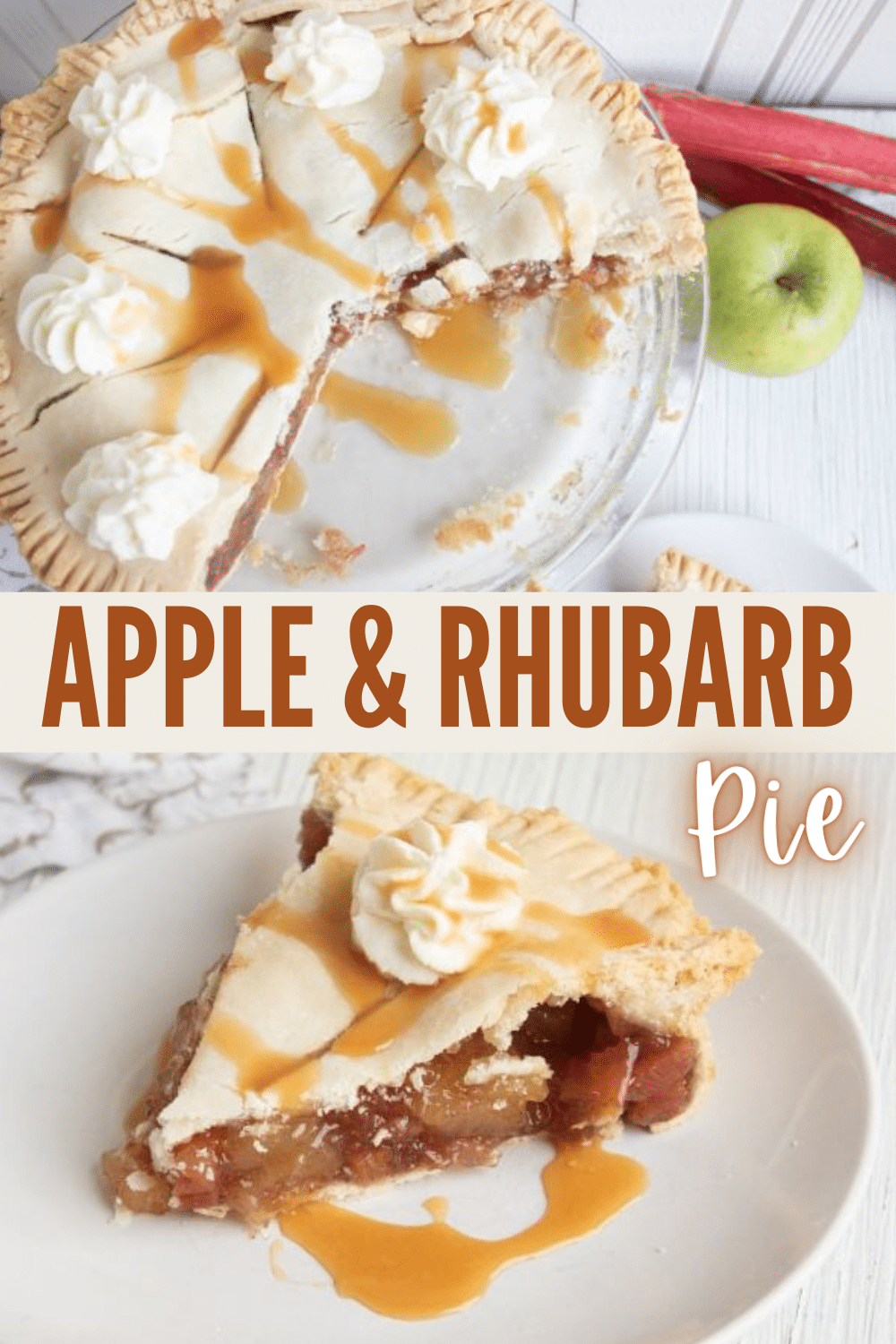 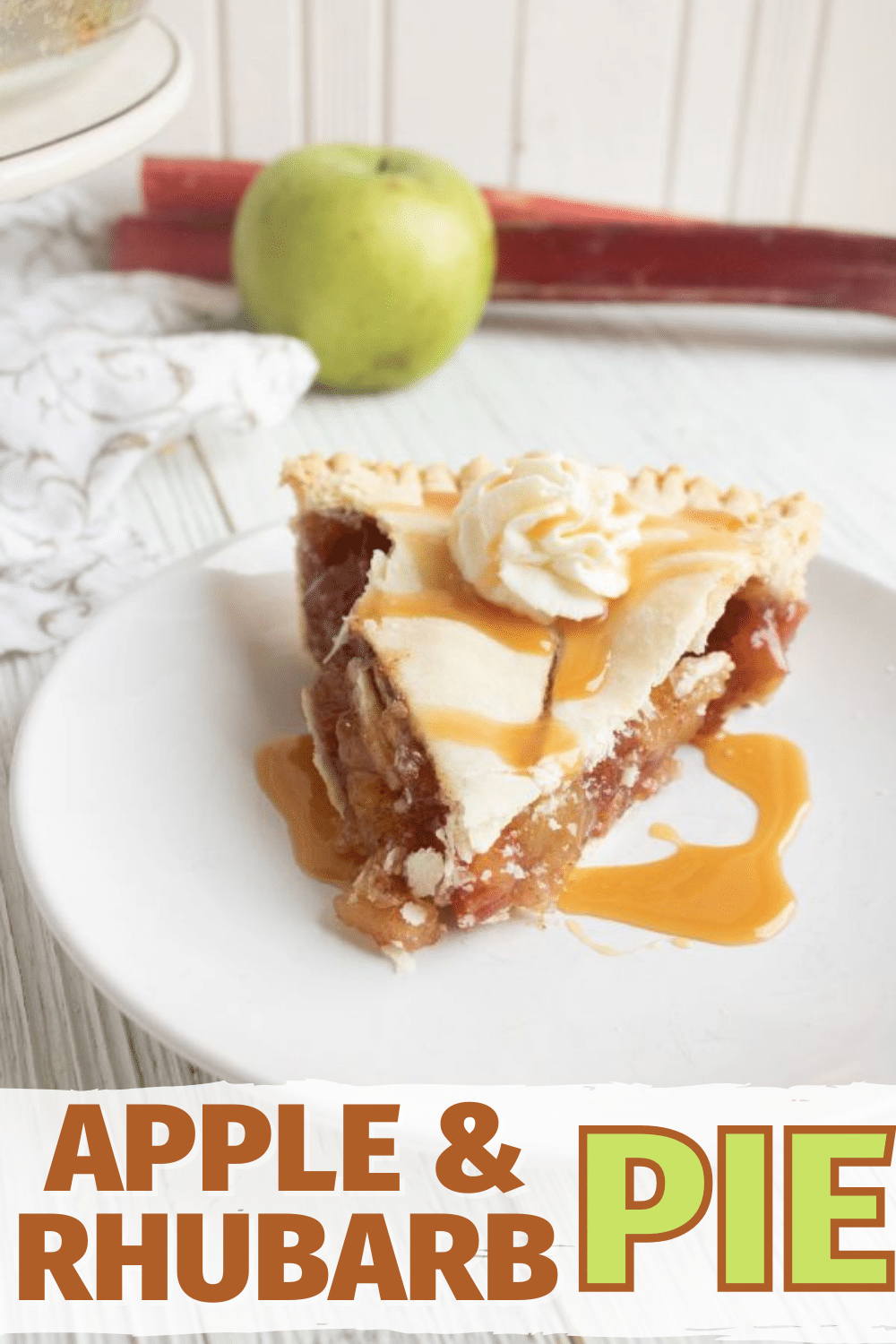 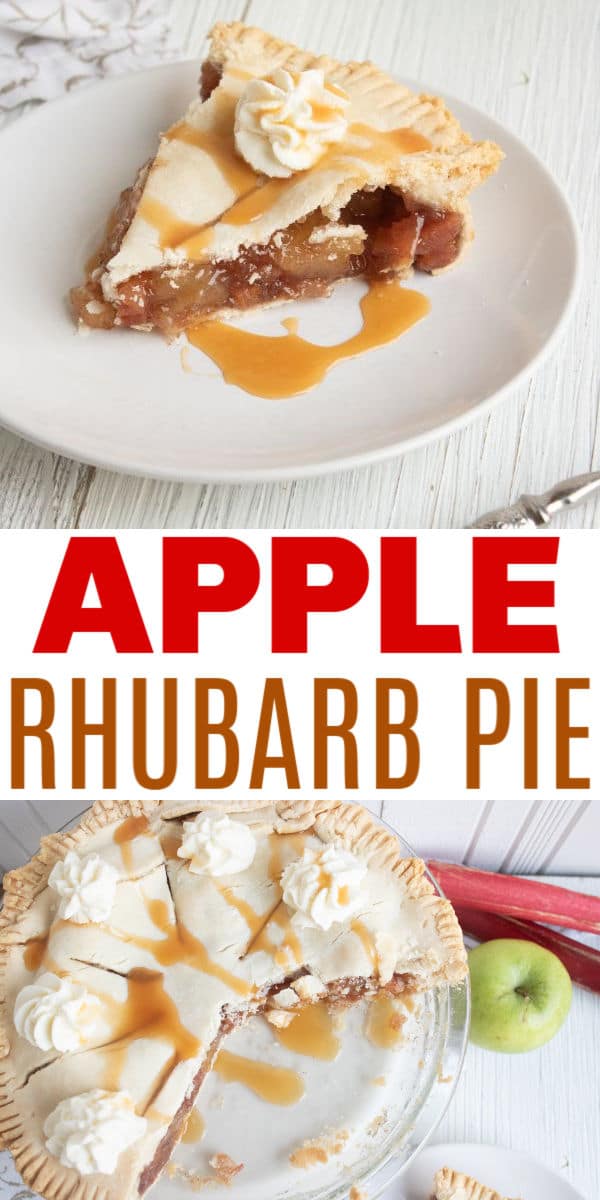 Apple and Rhubarb Pie is a traditional dessert for fall and the Thanksgiving holiday. A classic dessert recipe that will bring color and flavor to your table. 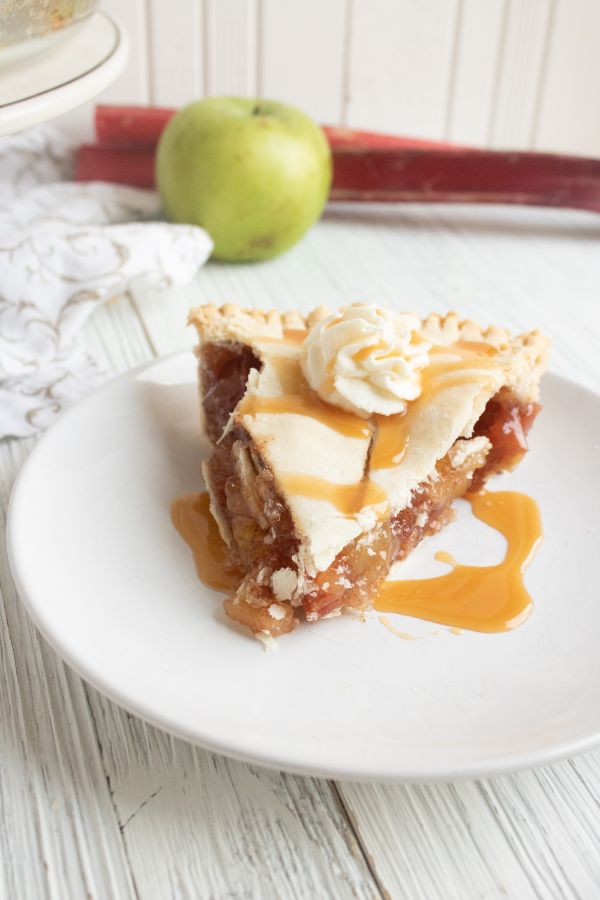 Rhubarb is actually a vegetable that grows long leafy stalks. It has been used as a food since the 18th to 19th centuries. Prior to that is was traditionally used in medicines.

Rhubarb stalks have a tart taste and are typically used in sweet recipes to help tame the strong tart flavor. Many times the stalks are boiled with sugar to help make them more palatable and it is commonly used in pies!

One thing to know about rhubarb is that only the stalks can be safely eaten. The leaves contain some poisonous toxins!

Rhubarb does contain some Vitamin C and calcium.

When picking rhubarb look for stalks that are firm, well-colored and straight! The colors of the rhubarb and apples make this a gorgeous pie.

INGREDIENTS FOR APPLE AND RHUBARB PIE

I like to find ways to save time in the kitchen that doesn’t sacrifice taste. One easy way to save time while still getting great results is by using refrigerated pie crusts! They are delicious! 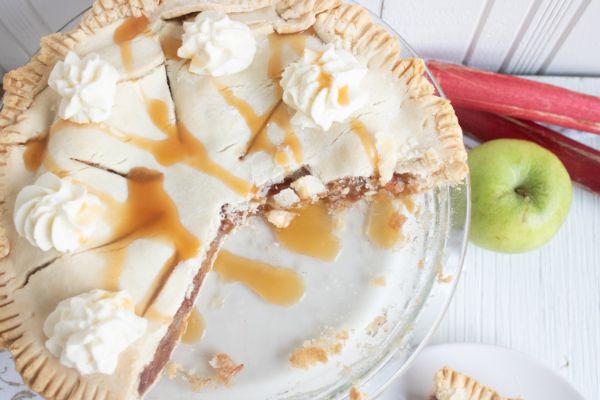 HOW TO MAKE APPLE AND RHUBARB PIE

This recipe is actually very simple compared to other pies I have made. The shortcuts of store-bought refrigerated pie crusts and apple pie filling allow me to spend more time with my family but still end up with a delicious apple and rhubarb pie!

Start off by preheating your oven to 350 degrees F.

Spray a 9-inch pie pan with non-stick cooking spray so that you will be able to easily remove slices from your pie later!

Put one of the refrigerated pie crusts in the pie pan. 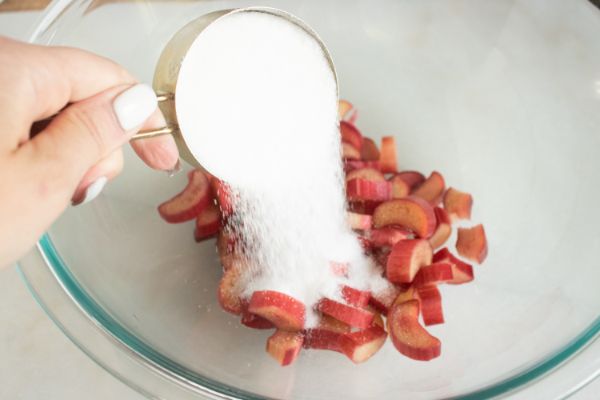 Now take the sliced rhubarb, sugar and cinnamon and place in a medium-sized mixing bowl.

Stir these ingredients together to coat the rhubarb. Allow this mixture to sit for about 15 minutes, stirring occasionally.

After the 15 minutes go ahead and add in the apple pie filling, apple pie spice and tapioca. Mix everything together well. 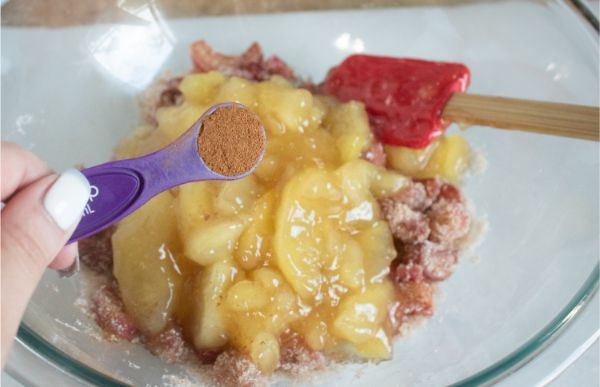 Pour the apple rhubarb mixture into the crust-lined pie pan.

Take the 2nd pie crust and layer it on top of the filled pie pan.

Flute the edges of the crust to seal. 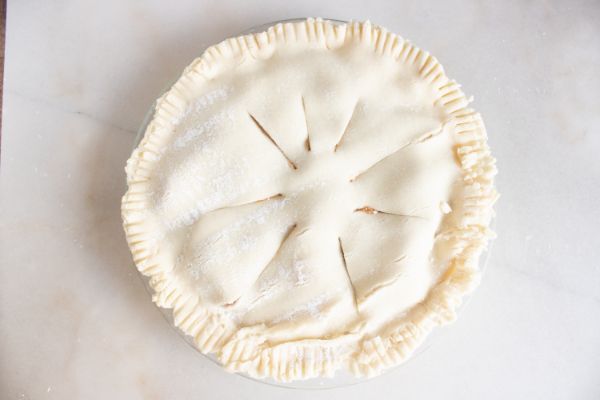 Place the pie pan in the oven for 55 minutes. You want the crust to be golden brown!

Remove the pie from the oven and let it cool completely before serving! One little tip:  serve this with a scoop of ice cream to make it even better! 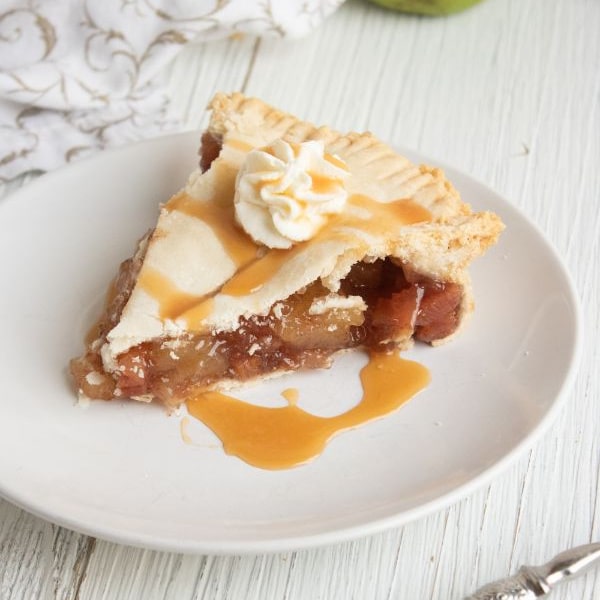 There is no doubt that your family will love this apple and rhubarb pie recipe. You can print off the complete ingredients and instructions via the recipe card below. 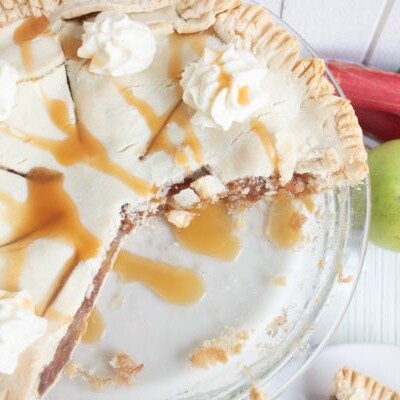 If you loved this fall recipe be sure to check out these other great ideas:

Be sure to PIN this recipe so you can come back and make it again later!

1 thought on “Apple and Rhubarb Pie”