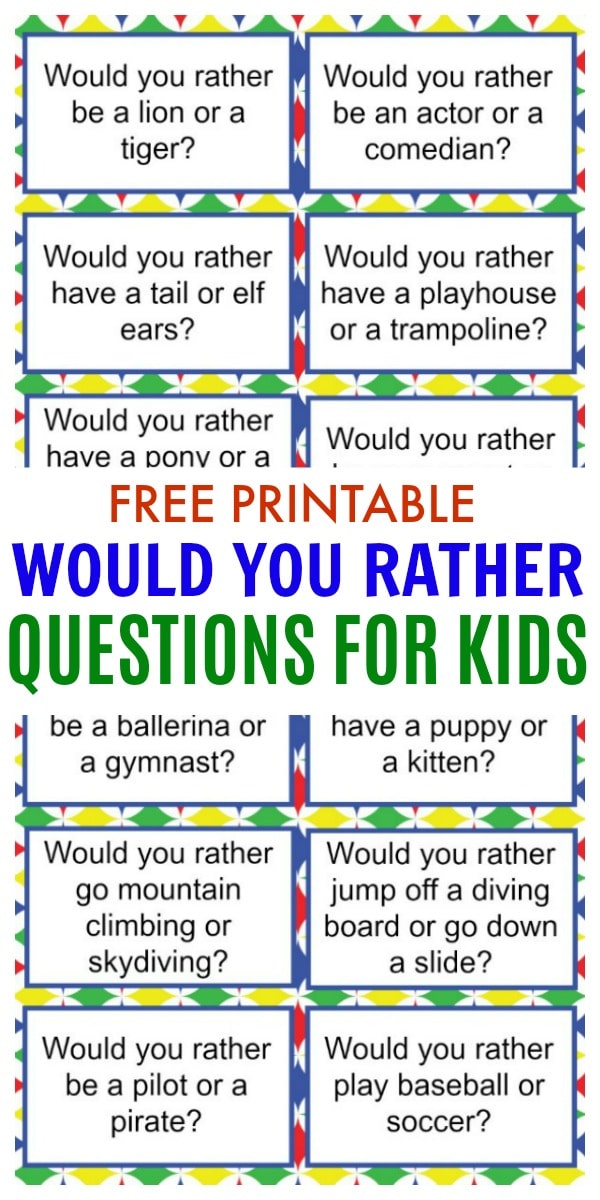 What Is Would You Rather?

You may have never heard of would you rather. These are simple questions the whole family can take turns answering.

Each question gives you a choice of two things. Everyone says which thing they would rather do and why.

The questions are geared towards kids, but the adults I know also get a kick out of answering!! My family always loves to expound on why they chose what they chose.

These questions can be about ANYTHING. It is also fun to have people make up their own would you rather questions.

How Do You Play Would You Rather?

Would You Rather is a very simple game which is what makes it such a wonderful family activity! Basically, players take turns posing questions and everyone else answers.

You can make up whatever questions you want, but it’s helpful to have some starter questions to get the game going.

One of the best things about Would You Rather is that the object of the game is to learn more about each other and to have fun! Everyone is a winner and there are no wrong answers so it’s fun for everyone.

Typically would you rather questions are silly. The great thing about getting kids talking is you can take a silly question and make it into a teachable moment.

For example the question, Would You Rather Have a Pony or a Monkey for a Pet, seems simple enough. If you ask your child a few questions about their answer you can really get kids thinking.

Expound the would you rather question by asking your child what kind of care each of those pets would require. Does your home have the room for a pony or a monkey? Would a monkey get along with the other pets in your family?

Asking your child questions about their answer will get them thinking about all the things that can go into the decision making process.

Bring Your Family Together

I don’t know any parents who don’t want to spend more quality time with their children. Finding ways to connect with our kids and get them talking is a priority (or should be, lol).

The problem is that most kids don’t want to just sit down and “chat” with their parents. If we can find ways to “talk” to our kids in a fun way it will be received so much easier.

Would you rather questions for kids are a simple way to connect and talk to our kids and have fun at the same time. Kids won’t even realize that they are “connecting” with their parents too!

Great for Boys and Girls

These would you rather questions for kids are great for girls and boys. The questions are perfect for getting boys and girls to think about all sorts of different topics.

I have always encouraged my children to be open about traditional gender roles. If a question asks if you would rather be an astronaut or a mechanic, I want my girls to realize that these are not professions limited to just males.

The same thing goes for my boys. If the question asks if you would rather learn to sew or knit, these are not hobbies exclusive to girls.

I love to hear what my kids pick on questions that seem geared more towards one gender or another.

Would You Rather Questions for Kids

Here are over 30 Would You Rather Questions to kickstart your game with your kids.

Tips for Coming Up With Your Own Questions

Would you rather questions are so easy to create because you simply need to present two options. Here are some topics to consider to help you come up with your own comparisons.

Create choices between two different people and ask who they’d rather meet, be or trade places with for a day. Or simply ask which of the two they think is best at what they do. Like, who is the best athlete — LeBron James or Roger Federer?

Create choices between different animals and ask which they’d rather own, be, or have the same abilities as. Have fun and be a little silly! Like, would you rather have a pet dragon or a pet unicorn?

Create choices between different foods and ask which they prefer to eat or which one they’d prefer to give up forever. Or, pit categories against one another. For example, would you rather give up candy or fast food for the rest of your life?

Create choices between different places and ask which they prefer to visit or spend time in.

Create choices between different activities and ask which they’d prefer to do or learn. For example, would you rather be able to play piano or guitar?

Now that you’ve got the idea, stretch yourself to come up with more unusual pairings. Here are a few suggestions to get you started:

I have four pages of Would You Rather Questions for Kids available for you to download.

Printing these off on white cardstock

helps them last longer. I also like to laminate

mine for extended use.

All you have to do is fill in the form below to download and print the  Would You Rather Questions for Kids.

Fill in the form above. After you submit the form, you’ll receive an email from “Wondermom Wannabe” with a direct link to the printable. If you do not see the email in your inbox within a few minutes, check your spam folder.

Where can I find my file after I download it?

The most likely place will be in your computer’s Downloads folder. You can also select “Downloads” in your browser menu to see a list of your downloads, then simply select “Show in folder” below the file name to see where it is stored on your computer.

How do I print a PDF?

You’ll need a program that supports PDFS, like Adobe Acrobat (which is free). Open the program, click File > Print. Select your printer and set the number of copies you want to print. Double check your print preview, then click print.

How to Use the Printable Cards

Print off multiple sets of the cards and keep them in various locations to make it easy to have fun any time, anywhere.

In addition, the cards can be used as icebreakers for a gathering or as a party game at a birthday.

If you want more ideas to keep conversations and laughs flowing at home here are some more great ideas.

93 thoughts on “Would You Rather Questions for Kids” 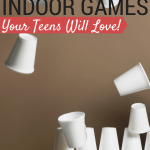