All parents strive to provide for their families to the best of their abilities.  That’s why it’s important for you to read this.  You face dangers concerning your financial well being and must know how to preserve what you have worked so hard to build up.

What Happens When You Put Money In The Bank?

When you put money in the bank, legally it is no longer your property.  Banks are now gambling with that money in the derivatives market to make up for the decline in lending income.

Taxpayers were asked to bail the big banks out when the bets went bad.  Soon money may be taken directly from deposits or from pensions and retirement accounts to bolster systemically important banks.

Debt Is On The Rise

Many of you probably have heard that since Ben Bernanke became the head of the Federal Reserve, the U.S. has doubled its national debt.   Unfortunately all the countries of the world are also borrowing themselves into extinction.

Eventually this debt will force interest rates to rise as investors will demand higher returns to offset the increased likelihood of default.  As interest rates rise, the estimated one quadrillion dollars of derivatives many of which are tied to interest rates, risk default.  This will end badly and probably usher in a new global currency which is likely to be based in part on gold and silver. 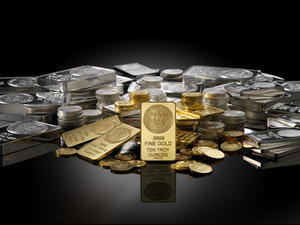 What Should You Do To Protect Your Family Against Financial Devastation?

Tangible assets are the surest protection for your family against the coming financial devastation.  Aside from a long term supply of necessities, gold bullion held in your possession can help get you through the tough times ahead.

Gold in particular is currently in very short supply.  Many times now there is a waiting period of weeks to get an order of gold bullion.  Germany was told that it would only receive a fraction of its gold held by the U.S. over a period of seven years.

The recent price dip in gold represents a tremendous buying opportunity.  Once interest rates start rising in earnest the price of gold will rise rapidly. For these reasons, it’s a good idea to buy coins now.

Even if you don’t believe the current economy is doomed, the historical performance of gold makes it a good investment anyway. To protect your family’s financial future, it’s worth securing some of your assets in gold.

Special thanks to my dad, Bill Hedrick. who lent his expertise in this area to help bring this helpful and important information to you.

27 thoughts on “Why You Should Think Beyond Banks For Investments”