The wonderful thing about people is that we are each a unique creation. Not only do we come in a variety of shapes, sizes, and colors, we also vary in personality, temperament, and attitudes.

Some of us are shy, while others are outgoing. Some are planners while others are impulsive. We are optimists, pessimists, selfless, selfish, strong, weak, and most of us are all of things depending on who we’re with, where we are, and what we’re doing.

With this chaotic combination of characteristics brewing in all seven billion of us, it’s no wonder that we sometimes have a hard time seeing eye-to-eye with EVERYONE. Different politics, religious beliefs, principles, and perspectives place many of us at odds with one another quite often. 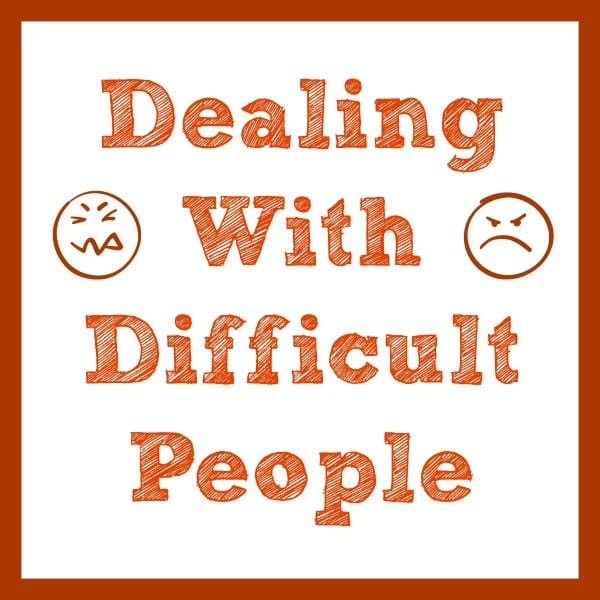 If you’re a person who doesn’t like conflict, you may try to avoid these uncomfortable situations by keeping your opinions to yourself when you are in the company of someone whose opinions differ from yours. You might even turn the other cheek if someone tries to goad you into a confrontation.

Because I have a hot temper, I’ve spend a lot of time reading about how to control my anger, especially when it comes to dealing with difficult people.

The advice on this topic always falls into one of two areas: 1) change your attitude, and 2) psychologically manipulate the other person. I know, the second area sounds more fun, but it’s the first area where you’ll make great strides towards your own happiness so we’ll start there.

If you’ve ever been to a therapist (or watched one on television), you’re probably familiar with the saying, “Someone else can’t make you feel something, only you can control what you’re feeling.”

This advice normally gets an exaggerated eye roll from me because there are plenty of times I’m having a great day until I get home and realize none of my children have hung up their backpacks or started their homework, even though we’ve discussed these responsibilities over a dozen times. Their irresponsibility definitely affects my mood! If I let it.

Yep, I’m saying I have a choice. I can CHOOSE to get angry and start yelling about laziness and thanklessness and irresponsibility.

OR, I can calmly assign each of the children an extra chore (Yay! A plausible excuse to get someone else to dust the family room), with the promise of additional chores if their tasks aren’t completed before dinner.

So, while you can’t control other people, you can control your reaction to them. Now let’s look at how you can put that self-control to good use.

If you and a co-worker can’t seem to see eye-to-eye on anything, make sure you focus on the issue being debated and not on how stubborn the other person is being. Sometimes we are so put off by someone’s actions or words that we dismiss everything that person says or does without consideration.

This behavior typically results in the other person becoming even more difficult as he or she strains to be heard and understood. By acknowledging their salient points, you appear reasonable and well-intentioned to anyone else who might be weighing in on the decision and you diffuse the pattern of hostility that might otherwise develop.

You can affect issues. You cannot change another person.

When I worked in customer service we were trained to remain calm no matter how upset a customer was when dealing with us. The intent was to keep the engagement at a civil discourse, rather than escalating it to a heated debate or argument.

Just as most people will smile at you if you smile at them first, most angry individuals will run out of steam and meet your quiet, non-threatening tone if you can maintain it rather than become agitated or raise your voice.

Even if the other person doesn’t cool down in response to your calm demeanor, you will avoid saying or doing things you might regret.

Play Devil’s Advocate with Yourself

If you dislike a person, you are likely to attribute a number of negative characteristics to him or her that may or may not be true. Rather than painting the person with that negative paintbrush, when he or she does something that annoys or upsets you, try to think up reasonable explanations that aren’t negative.

I find this easier to do if I picture someone I like and care about doing or saying whatever the person has done or said. When someone cuts me off in traffic, I might at first think, “Who does that jerk thing he is? He seems to think that it’s more important for him to get to where he is going than anyone else on the road, so much so that he’s driving in a reckless manner!”

But if my friend accidentally cut me off, I would think “I hope she’s okay! She must have a million thing s to do today that are occupying her mind. She didn’t even see me here.”

I’m not saying no one ever has nefarious intentions. You just don’t need to assume the people you don’t like ALWAYS have them.

Another thing I do when dealing with particularly difficult people is to think of reasons I pity them. I don’t ever say these things to them, but it makes it easier to deal with a barrage of insults when I tell myself they’re only doing it because they are miserable human beings who are trying to draw attention away from their own misfortune.

Some people enjoy being difficult. I’m not sure if they like the attention or if it’s just entertaining for them to rile other people up.

Life’s too short though for you to scratch that itch for them on a regular basis. If you know someone like this, your best bet is to avoid engaging with them except when absolutely necessary.

The other woman on the fundraising committee insists on running all the flyers on yellow paper, though you’d prefer blue. Letting it go doesn’t make her a winner and you a loser, it makes you smart and means you have a life outside of this one task.

Save the knockdown, drag out fight for when she is pressing to have you personally deliver all of the fundraising items rather than arranging for a pick up day at the school.

Hopefully you didn’t skip right to this section, because without adjusting your own attitude, you won’t enjoy much success with this approach. Also, please notice that I titled this section “Affect Their Behavior” NOT “Change Their Behavior.”

If you skipped the first section because you think it’s too hard to change your own attitude, you should realize that it will be even harder to change someone else’s. The best you can reasonably hope for is to have an effect on how another person behaves.

Focus Attention on the Other Person

A common bully strategy is to verbally attack the victim. Difficult people like to keep you on the defensive so they will try to keep the focus on your faults.

The best way to stop these attacks is to respond to each one with similar observations about the other person. If you choose this approach, keep in mind the advice above to “Keep Your Cool” because you don’t want to escalate an argument or turn it into trading insults.

Instead, keep your tone level and your words polite, but direct. For example, in response to “The theme you’ve picked for the party is a lame idea” you could respond, “Since you haven’t offered any suggestions, I thought I would get the ball rolling. I’d love to hear your ideas though!”

Difficult people like to be in control so they will usually try to lead the conversation. Break up their flow by changing the topic of discussion and redirecting the conversation to an area you can command.

Be kind, but firm, if they interrupt you by pointing out the interruption and requesting the opportunity to finish what you were saying.

If you use consequence assertion, you have to be very careful about how you do so in order to avoid appearing aggressive. Keep your body language and vocal cues non-threatening, but be assertive in your words.

With consequence assertion, you essentially issue an ultimatum. “I appreciate your perspective and opinions and would love for you to continue to share them with us. However, if you continue to stonewall the progress of this committee, I will have to call for a vote to remove you.”

These are the techniques I use to deal with difficult people. Have you tried them? Do they work for you? Is there anything else you do that has been effective? Please share your insights in the comments below.

54 thoughts on “Dealing With Difficult People”