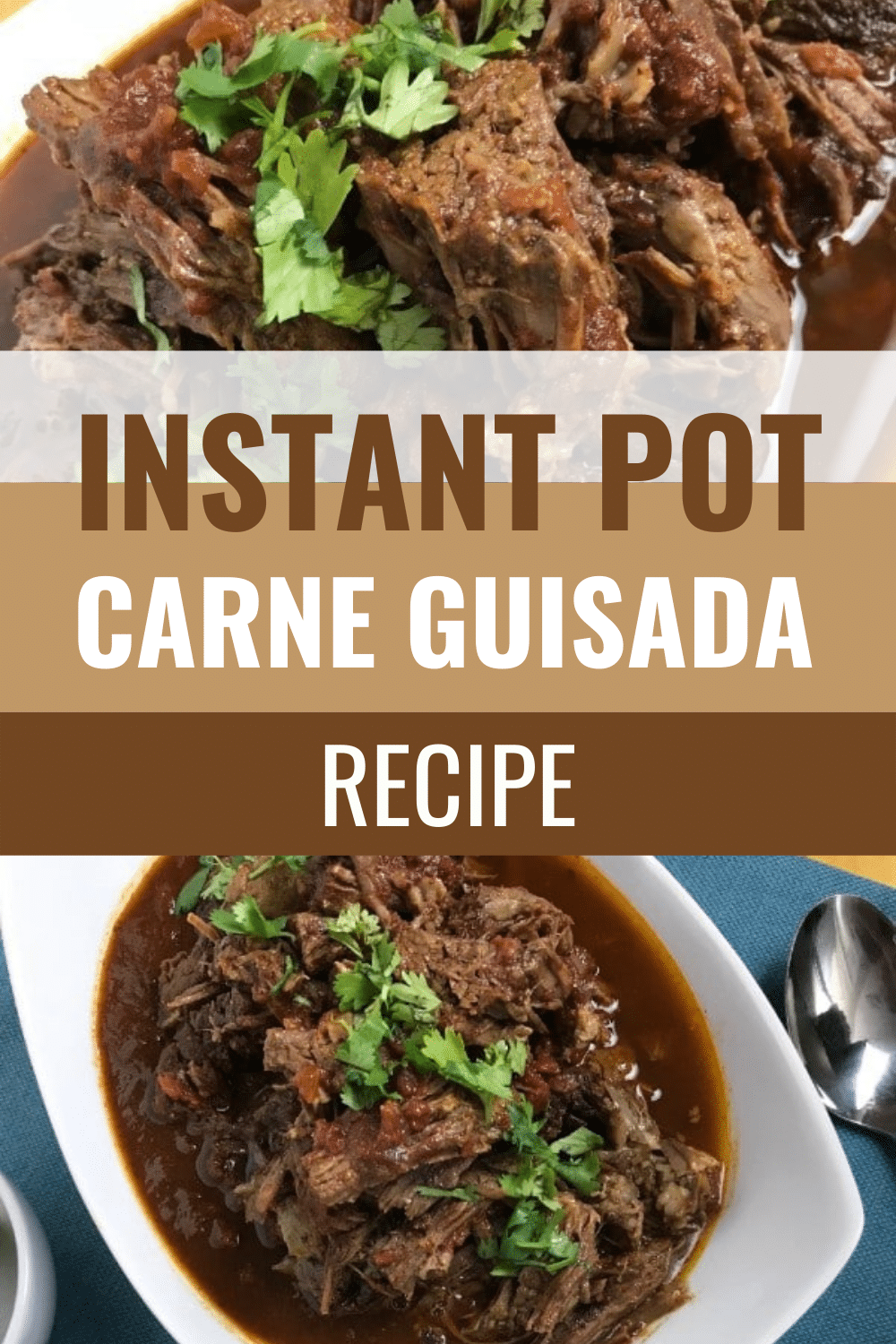 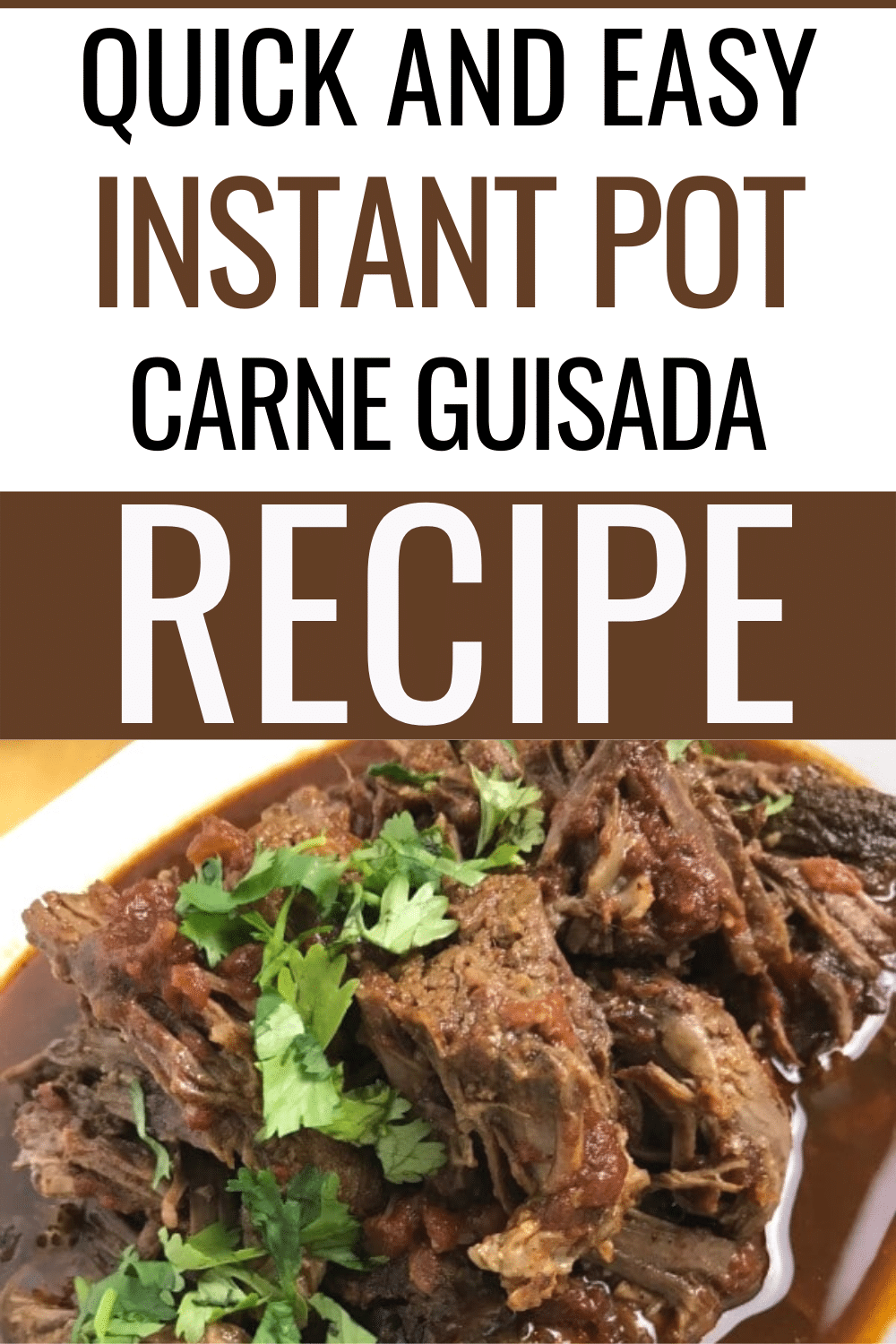 This Instant Pot Carne Guisada (Puerto Rican Beef Stew) is a flavorful twist on ordinary pot roast and perfect for anyone who likes Latin food. And like almost all of my Instant Pot recipes, this pot roast is super easy to make!

One of the best things about any electric pressure cooker is how well they work at turning inexpensive cuts of beef into mouthwatering tender beef chunks loaded with flavor. You won’t get the same result when you make this on a stove top.

And though a slow cooker does wonders for chuck roast, you have to remember to start dinner as soon as you’ve finished eating breakfast.

That being said, this recipe isn’t one that is ready quickly. You’ll spend about 15 minutes on the front end getting it ready to pressure cook, then you’ll have to allow the time for pressure to build up, 50 minutes of pressure cook time, and then time for a natural release. Plus, you need some time after it’s cooked to shred the beef and thicken the sauce.

Altogether, you’re looking at about 2 hours start to finish, but most of that time is letting the pressure cooker do the work. So, although it’s an easy recipe, it’s not one you’ll turn to for nights when you need to get dinner on the table in a hurry.

When you have the time to plan for it though, this Latin-inspired beef stew is well worth the wait. The meat is tender, juicy, and tastes amazing.

I like to start this right as the kids get home from school, then we have time for snacks, homework, and downtime before dinner. I recruit them to help at the end so one person can be stirring the sauce, another setting the table, while I shred the beef and yet another family member gets out the toppings.

To make this delicious stewed meat meal, you are going to need the following ingredients:

Other than the chipotle peppers, you likely already have all of these ingredients in your kitchen!

Chuck Roast: You can replace the chuck roast with any other stew meat such as bottom round roast, top round, or pot roast.

Diced Tomatoes: Instead of standard diced tomatoes, you can use Rotel for added flavor. You can also use four cups of fresh diced tomatoes instead of the canned tomatoes.

Chipotle Peppers in Adobo Sauce: If you have a hard time finding these (or simply don’t want to run out to get just one item), you can use Tabasco Chipotle Hot Sauce to get some of the same Latin flavor. Similarly, chipotle powder will bring some of the flavor or equal parts smoked paprika and ground cayenne pepper.

Bell Peppers: For added color, flavor, and nutrients you can add some diced bell peppers to the dish before pressure cooking.

Garlic: If, like me, you think almost everything tastes better with garlic go ahead and mince a couple of garlic cloves and cook them for a minute or two before deglazing the pot in step 2.

Red Wine: I omit this because my family doesn’t like the flavor with the red wine added but a dry red wine like Merlot works really well in this dish. Just add 1/4 cup to the pot before pressure cooking.

If you don’t have (or don’t want to use) packaged taco seasoning, you can easily make your own. Just combine:

First, we need to brown the roast. Press the “Sauté” button on your Instant Pot and wait until the display reads “Hot” before adding the olive oil.

While you’re waiting for the pot to heat, rub the roast all over with two tablespoons of taco seasoning. After you’ve added the oil to the pot, carefully set the roast inside.

Cook for 3-4 minutes on both sides to sear the top of and bottom of the roast. Then, remove it from the pot and set aside.

Add the beef broth to the pot and use a wooden spoon or spatula to scrape off any bits that are stuck to the bottom of the pot. After all of the stuck on pieces have been scraped up, return the roast to the pot and cancel sauté mode.

In a small bowl, combine the tomatoes, one tablespoon of taco seasoning, the chipotle peppers and vinegar. Stir to combine, then pour over the roast.

Now it’s time to let the Instant Pot take over. Secure the lid and turn the valve to “sealing.” Press “Manual” or “Pressure Cook” ( high pressure ) and set the time for 50 minutes.

When the cook time ends, allow for a natural release (don’t move the valve to “venting” until the pin drops indicating the pressure has completely released). If you’re impatient, you can quick release sooner, but no less than 10 minutes of natural release if you want the meat to be fork tender (so it will be easy to shred).

When the pressure is fully released, carefully remove the lid.

Remove the roast from the pot and use two forks to shred it. Turn the pot on sauté mode and stir the sauce until it reaches the consistency you want.

If you have a kitchen helper, this is a great time to put them to work! One of you can reduce the sauce while the other shreds the beef.

Your Instant Pot Carne Guisada is ready to serve! You can spoon this delicious stew over white rice (or brown rice if you prefer) in a large bowl.

It can also be used as taco filling. Just spoon it into flour tortillas (or corn tortillas). You can also eat it right out of a bowl like a beef stew. 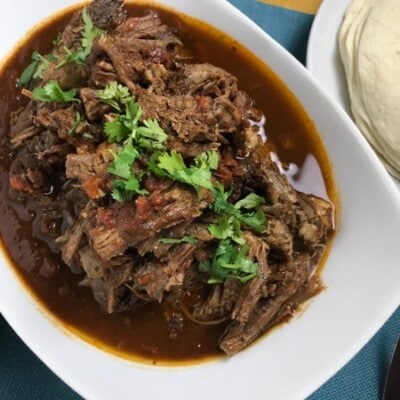 If you enjoyed this recipe, check out this collection of Instant Pot Mexican Recipes where you’ll find dozens of other recipes you might like.