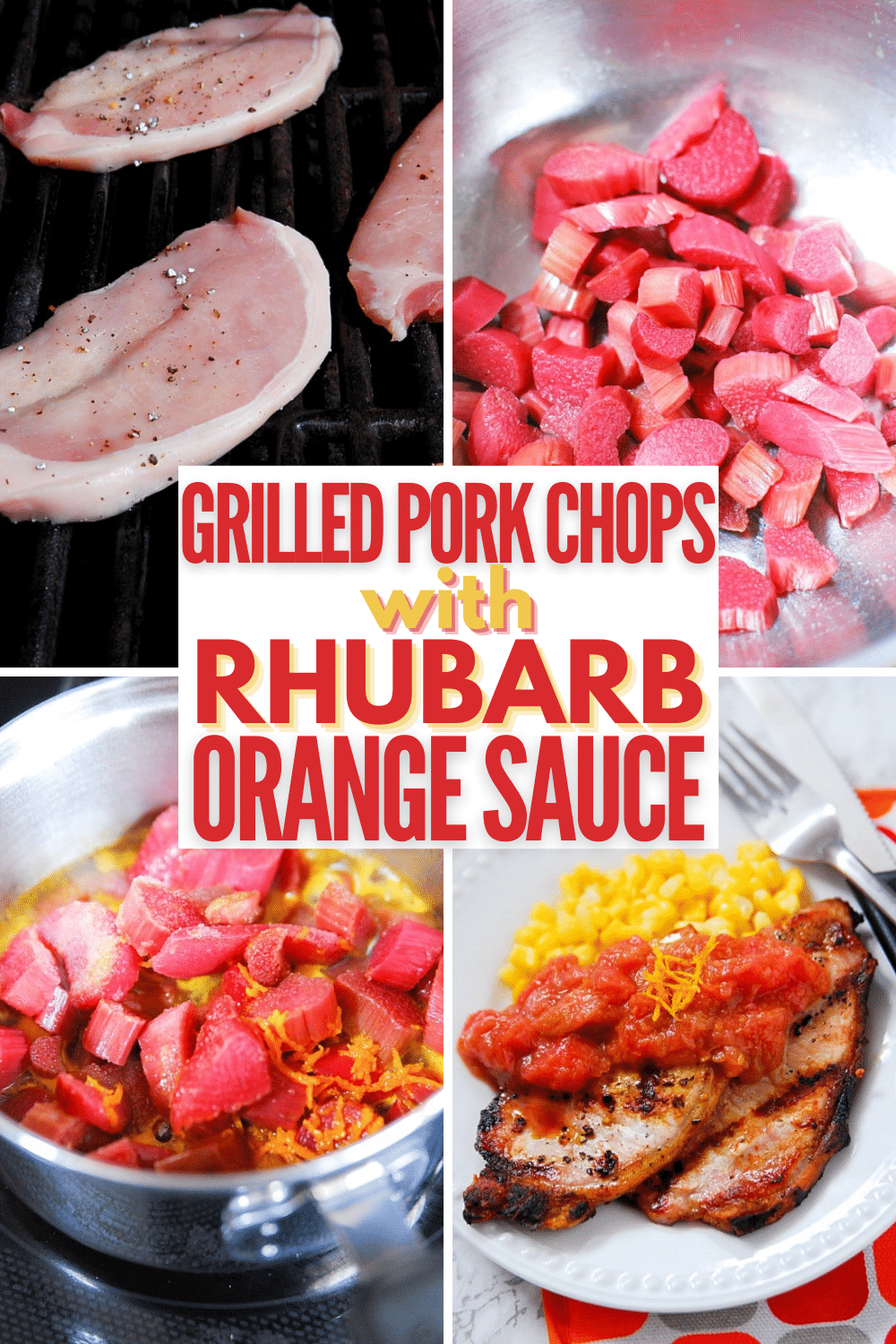 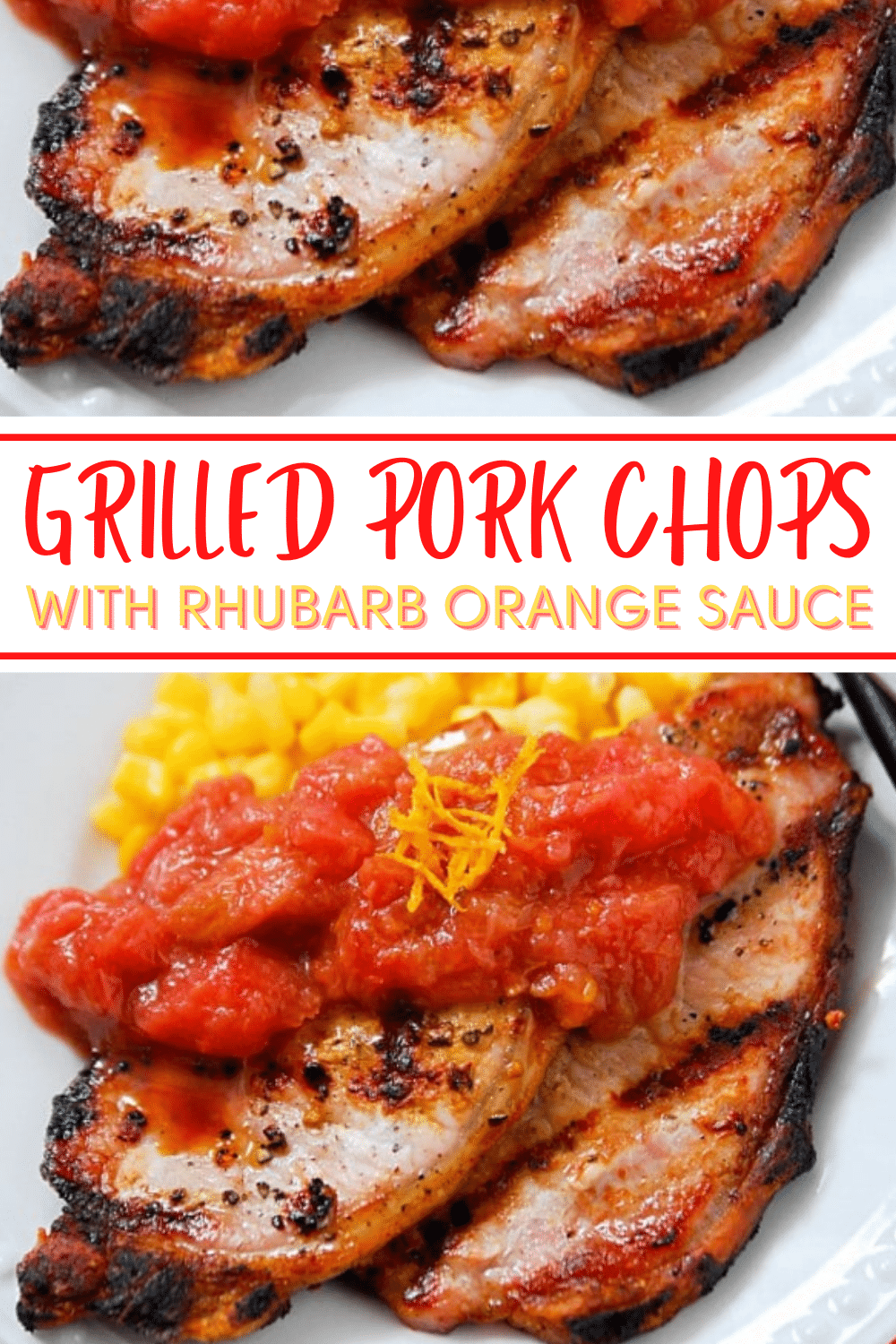 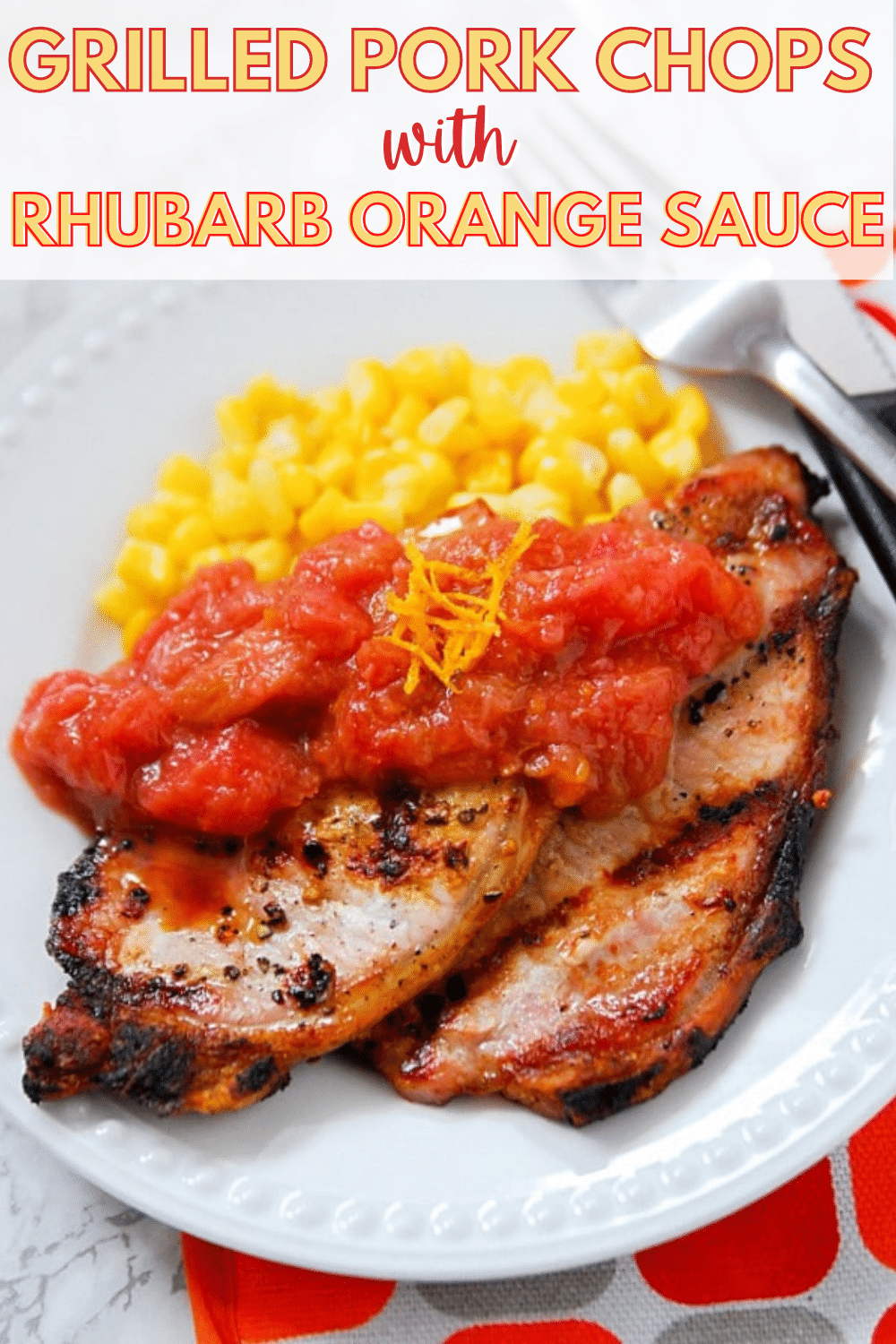 These Grilled Pork Chops with Orange Rhubarb Sauce are the perfect excuse to fire up the grill. It’s a quick and easy meal that is ready in under 30 minutes and the flavor is amazing!

This is one of my favorite summer recipes because not only is it super easy to make, it includes a vegetable that I don’t think gets the attention it deserves.

When I was ten years old, I visited an aunt who had a beautiful plant in the corner of her yard. It had giant green leaves and bright red stalks. This was the first time I’d seen rhubarb.

Of course, once I found out it was edible, I had to try it. After all, the stalks look (and feel) pretty much like red celery.

Do NOT eat it this way. Rhubarb tastes NOTHING like celery. It’s very tart, especially raw. And definitely don’t eat the leaves since they contain poisonous substances.

Even though rhubarb is a vegetable, it’s usually used like a fruit in cooking. You’ll usually see it used in jams and pies.

Because of its gorgeous color, plus the fact that it’s loaded with vitamin K and a good dose of several other vitamins and minerals. It also contains as much calcium as milk!

Why Pork Instead of Chicken?

I make a lot of dishes with chicken. It’s my hands-down favorite protein because it’s so versatile.

You can absolutely make this dish with chicken instead of pork. But here are some reasons you might not want to.

A pork center loin chop has only slightly more calories than a skinless chicken breast but almost double the fat. If you’re watching your fat intake, that might be a concern. But if you’re not, that extra fat means a moister cut of meat.

Another reason I prefer grilled pork chops to chicken is that they are easier to cook evenly. Chicken breasts tend to be thick in parts and thin in others. If you hammer them flat, they tend to dry out quickly on the grill.

How to Make Grilled Pork Chops with Rhubarb Orange Sauce

Even though this recipe is really easy, I’m going to show you some in-process shots just because not everyone has worked with rhubarb before. Hopefully, seeing the step-by-step photos will make you more comfortable.

First, you’ll just season the pork chops with some salt and pepper. Then, set them aside.

Next, you’ll make the sauce. Go ahead and start preheating your grill during this step to save time. You’ll want it to reach about 350 degrees (medium heat on most grills).

Cut your rhubarb into chunks and add to a medium pot.

Next, add the juice from an orange, some orange zest, rosemary, sugar, and just a little bit of vinegar.

Bring the ingredients to a boil and then reduce it to a simmer. Let it simmer until the rhubarb starts to break down. It should look like a thick, chunky ketchup (don’t worry, it won’t taste that way!).

When your grill is ready, place the pork chops on the grates.

Depending on how thick your pork chops are, you’ll grill them for 3 to 4 minutes on each side. The ones pictured above were closer to three minutes per side.

You’ll know they’re ready to flip when they are easy to turn. If they stick to the grates at all, let them cook a little longer.

After you’ve cooked the pork chops on both sides, remove from the grill and let them rest for about 5 minutes.

Spoon a generous serving of the rhubarb orange sauce on each pork chop and serve with rice, stuffing, corn, or potatoes.

Ready to make these Grilled Pork Chops with Rhubarb Orange Sauce? Here are the detailed measurements and instructions: 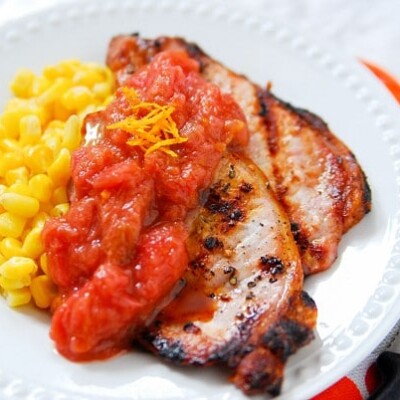