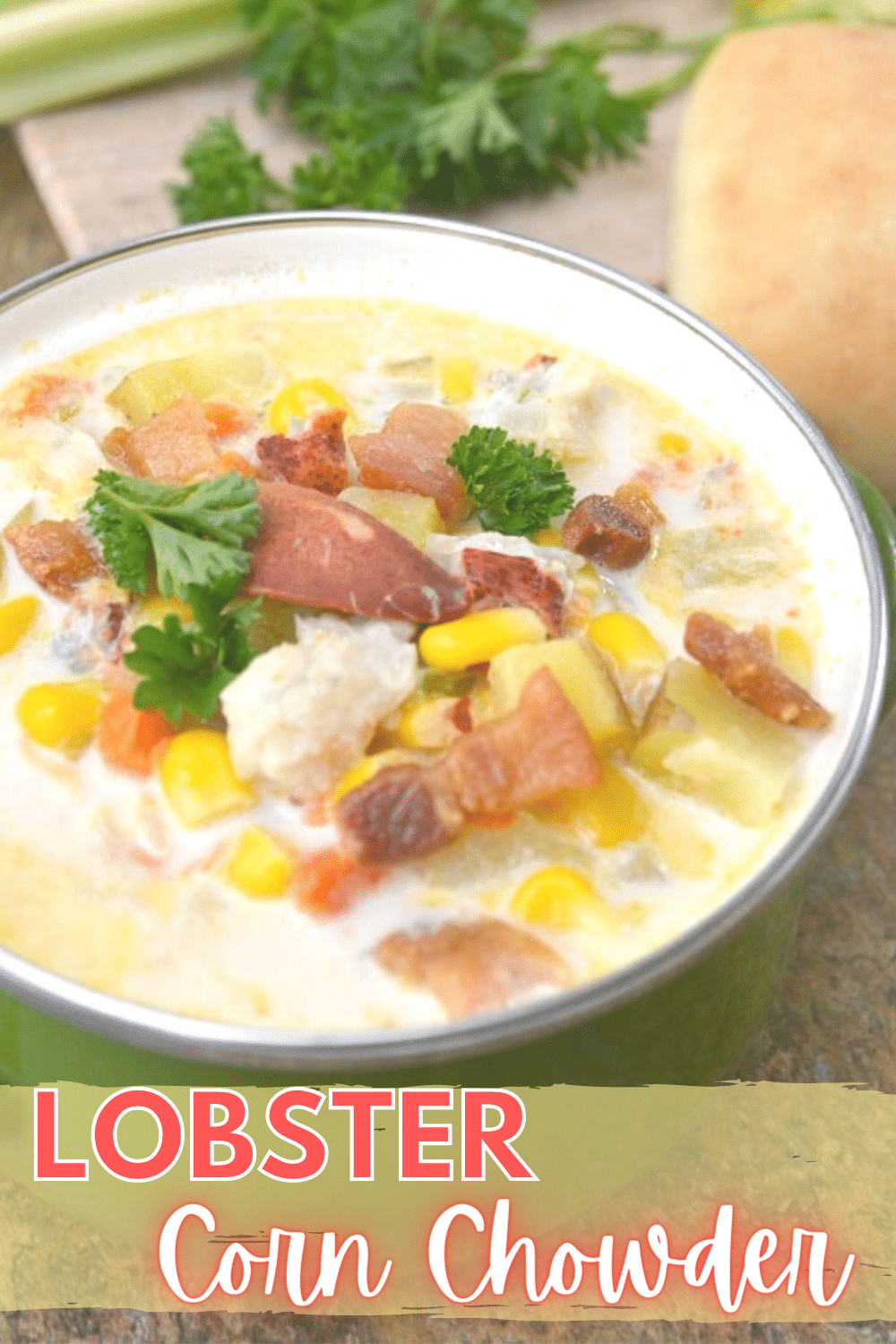 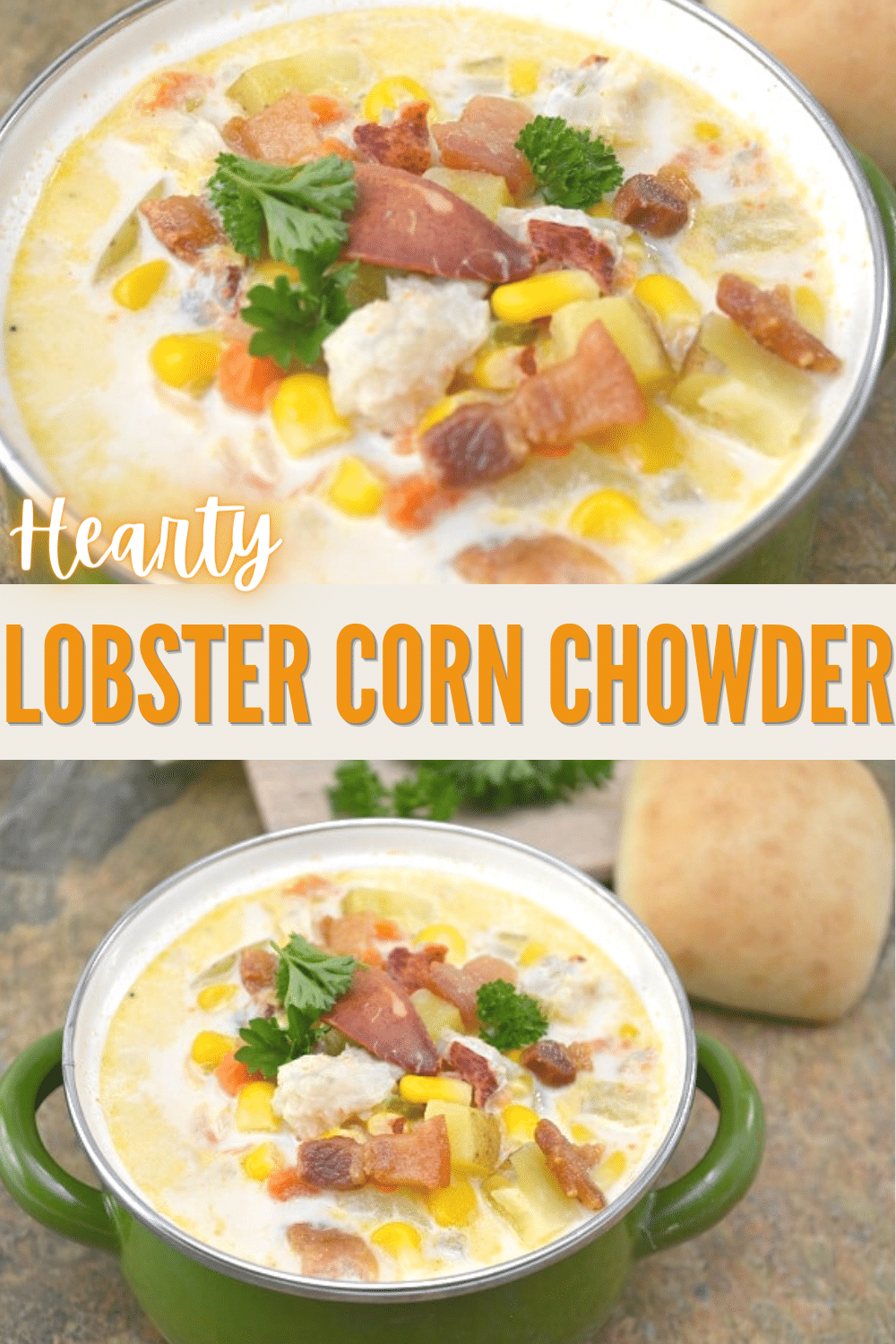 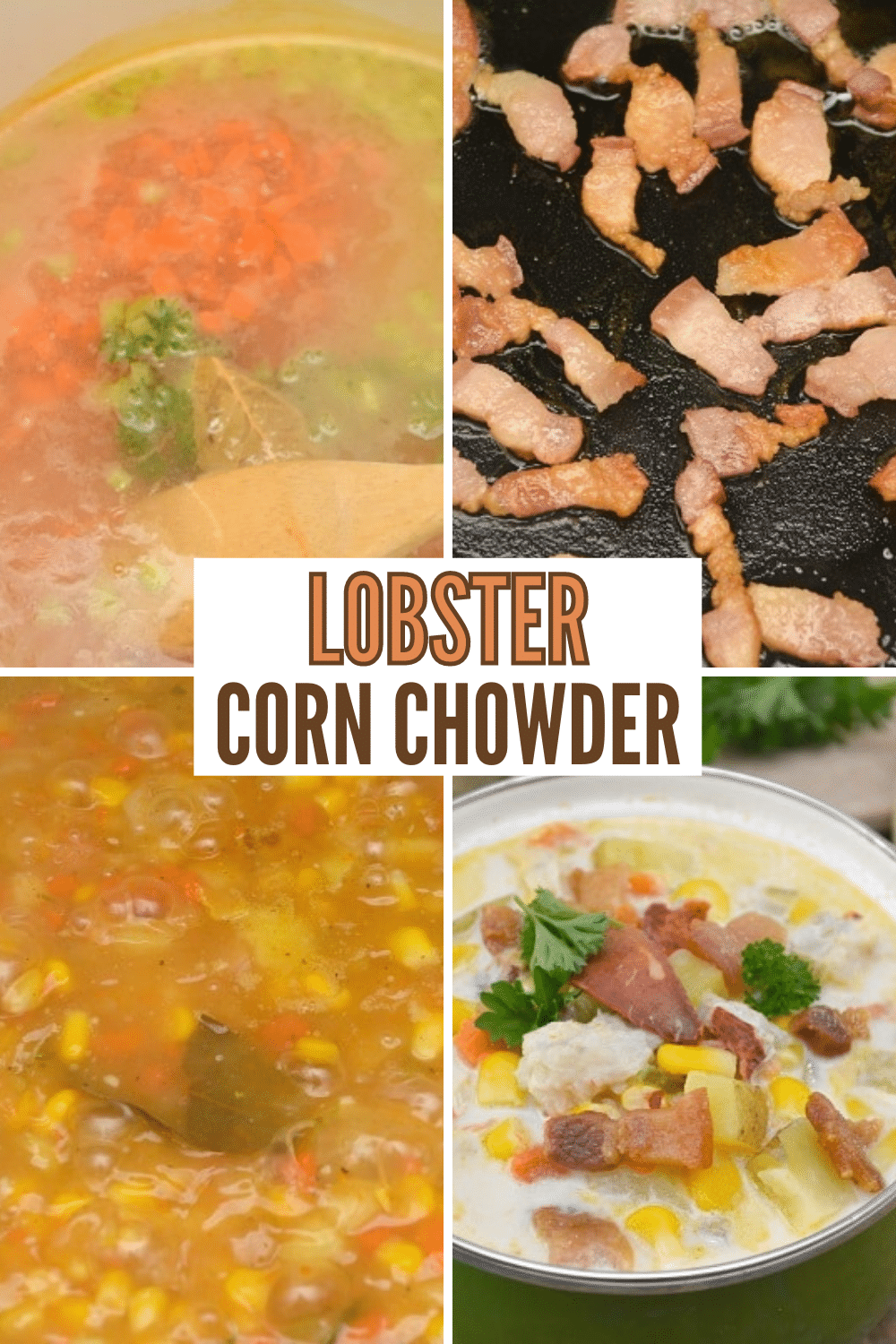 This Lobster Corn Chowder is an easy way to enjoy the sweet, delicate flavor of lobster without breaking the bank. This hearty soup is also very satisfying, especially after a cold day!

I love the taste of lobster but with five kids it’s not something I serve for dinner. I realized that if I incorporated lobster meat into a soup, I could get a lot more mileage out of a little bit of lobster meat.

I could easily (and cheaply) add substance to the dish with potatoes which wouldn’t overpower the lobster. I included corn to enhance the subtle sweetness of this delicious shellfish with corn and some salted pork to add some depth of flavor.

The end result is this delicious, filling Lobster Corn Chowder. Now I can enjoy lobster more often without taking out a second mortgage. 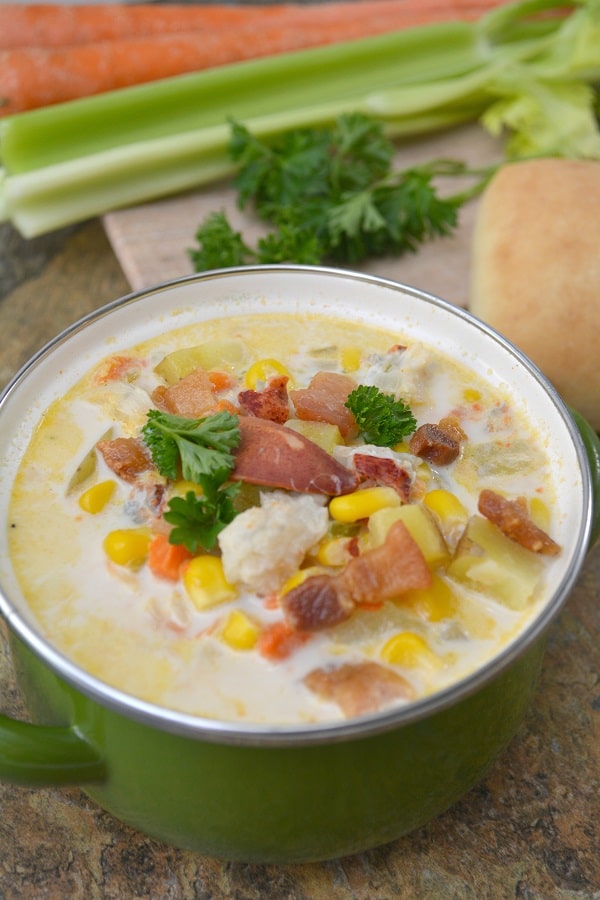 How to Make Lobster Corn Chowder

While I’m a big fan of one pot meals, to get the best flavor in this recipe you’re going to need to break out the frying pan too. Don’t worry, the steps are all still very simple and this one extra dirty dish is a small price to pay for the flavor this step adds to the Lobster Corn Chowder.

This recipe has mostly ordinary ingredients so you shouldn’t have to look far and wide to get them. Other than the lobster, the only item you might not normally keep on hand is the salt pork. Though it looks like bacon, it’s slightly different and you can easily substitute in bacon if you don’t have/can’t find salt pork. 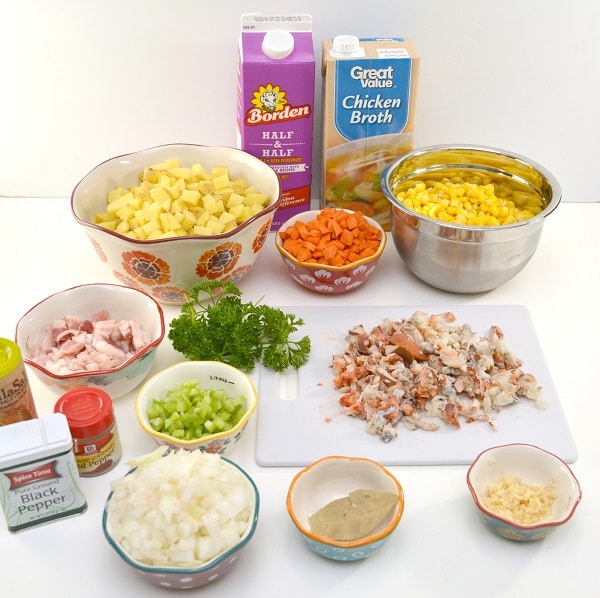 First, add chicken broth, celery, carrots, parsley and a bay leaf to a large pot. If you are using canned lobster meat, add the liquid from the cans as well. 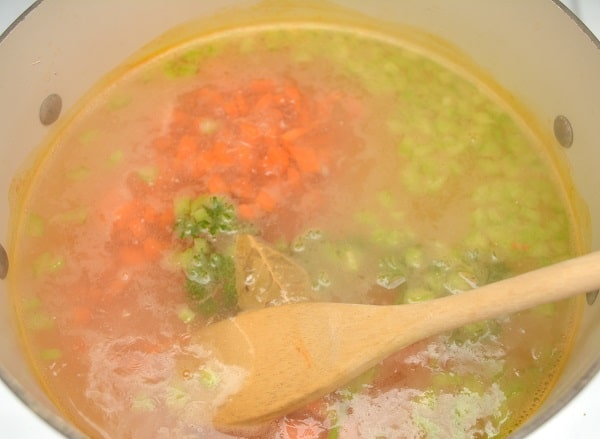 Heat over medium heat to a low boil. Then cover, reduce heat to medium low and cook until the vegetables are tender.

While the broth is simmering, cook the salt pork in a frying pan or skillet over medium heat until it’s crispy. If you don’t have salt pork, use 4-5 pieces of thick sliced bacon instead. 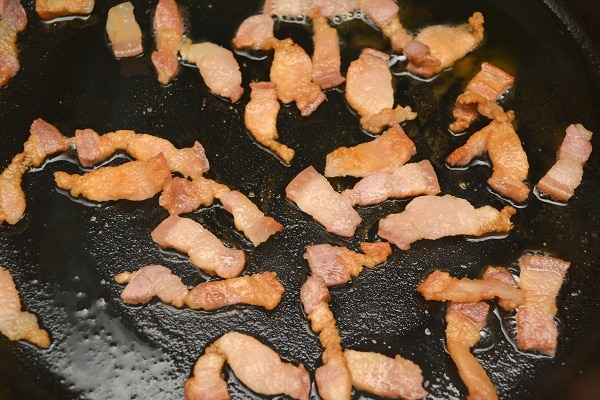 After the salt pork or bacon is crispy, remove it to a paper towel lined plate.

Next, add onions and garlic to the skillet with the pork fat. Cook them over medium heat until the onions are translucent. 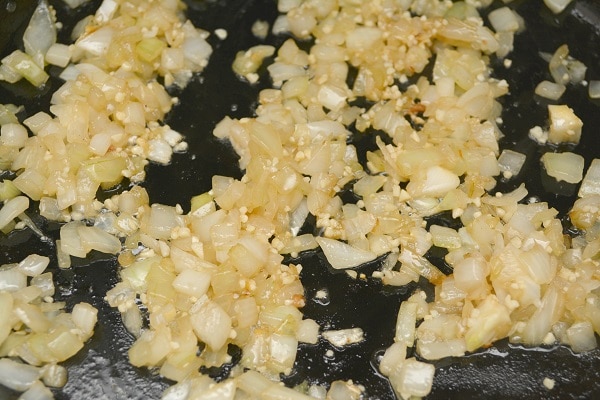 Add the sauteed onions and garlic to the broth in the pot. Also add corn and potatoes. Cook over medium heat and bring to a low rolling boil. 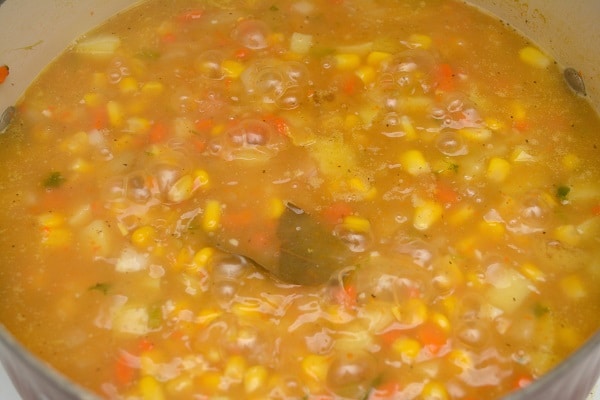 Cover the pot and cook for about 15 minutes until potatoes are tender.

Next, add milk and half and half. I also like just a small dash of cayenne pepper. Continue cooking, uncovered, for 5 minutes. 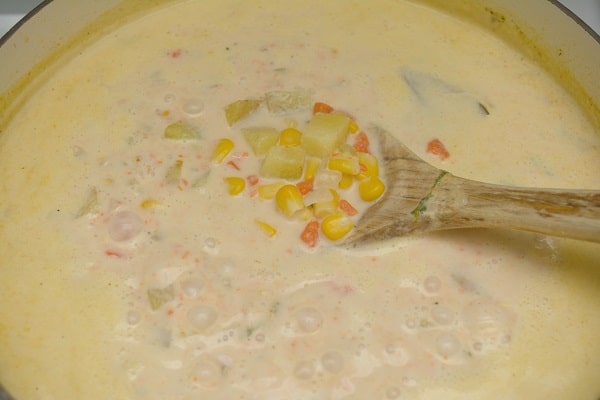 Finally, it’s time to add the lobster. Stir it in and add salt and pepper to taste. Reduce heat and simmer for 3-4 minutes. 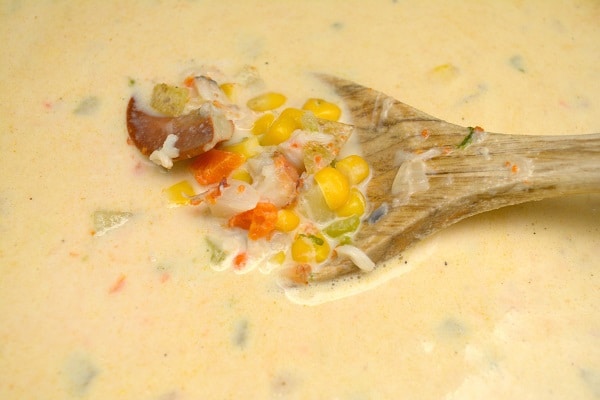 Spoon servings into bowls and top with fresh parsley and crumbled salt pork or bacon. Serve with a dinner roll or thick slice of bread. 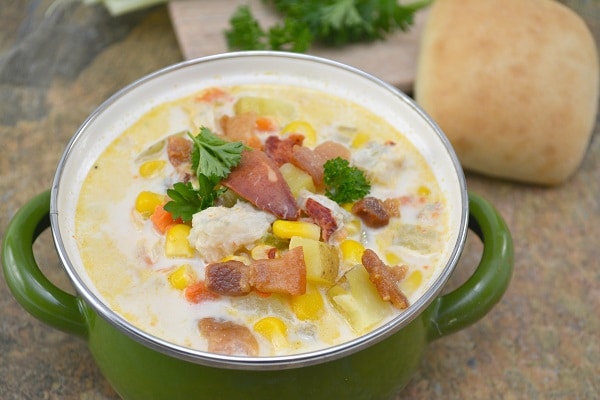 Here’s the recipe card with the exact measurements. 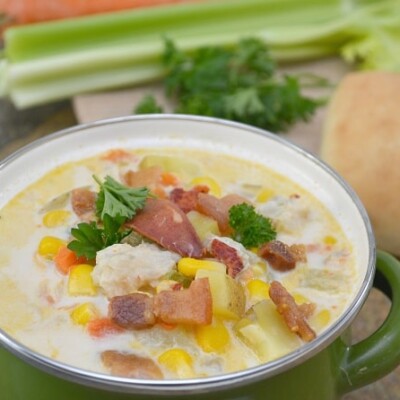 If you liked this Lobster Corn Chowder recipe, you might enjoy some of these other soup recipes.