Aside from my vegetarian daughter, everyone else in my family is a huge fan of flank steak. So, when she was left yesterday to go to an amusement park with a friend, I took advantage of the opportunity and decided to try a new flank steak recipe. I was running low on frozen vegetables, all I had was spinach, so I decided to make a spinach stuffed flank steak. My experiments in cooking don’t always work out, but I’m happy to announce this one was a hit. 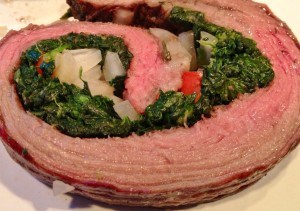 First, I started with a 1.5 pound flank steak. 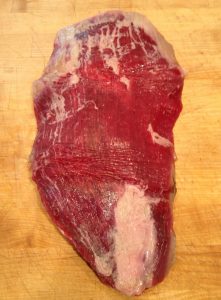 Then, I very carefully butterflied it (cut it in half starting at the right edge and stopping just before the left edge so that I could open it up and spread it out like a butterfly). Despite my caution, I did a terrible job. The end result was NOT pretty. I didn’t really care since the inside gets stuffed and rolled up, except now you don’t have a picture of it.

After I butterflied it, I placed it in a shallow roasting pan and sprinkled it with salt, pepper, and garlic powder. Then, I flipped it over and seasoned the other side. Next, I poured the marinade over the flank steak making sure it was completely coated. You could also use a large Ziploc bag instead of a pan. I put it in the refrigerator and let it marinate for 6 hours. You really need to marinate it for at least 4 hours. The longer it soaks, the better, so you could even prep it a day in advance.

When I removed it from the refrigerator, I laid it out ugly side up and covered the evidence of my amateur butchery with diced onions, diced red bell pepper, and the spinach. 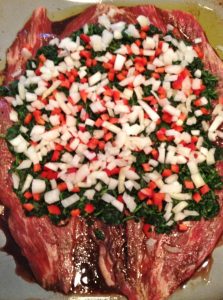 Next, I carefully rolled the flank steak starting at the bottom, squeezing it firmly to make sure it was rolled tight all the way to the top. Then I set the rolled flank steak on a foil-lined baking sheet.

At this point, I probably should have used some butcher’s string to hold it together but I didn’t have any so I took my chances. I’m happy to report, the roll held its shape and didn’t unravel during the roasting process.

I let it sit for a few minutes and then cut it into 1/2-inch slices. Here was the end result: 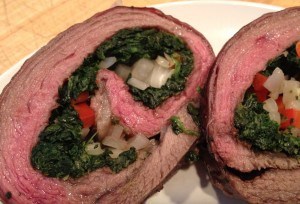 Some notes: If I had been making this for just me and my husband, I would have added mushrooms and Gorgonzola. Since I knew I was pressing my luck with the spinach, I decided not to risk turning off all the children so I skipped them this go-round.