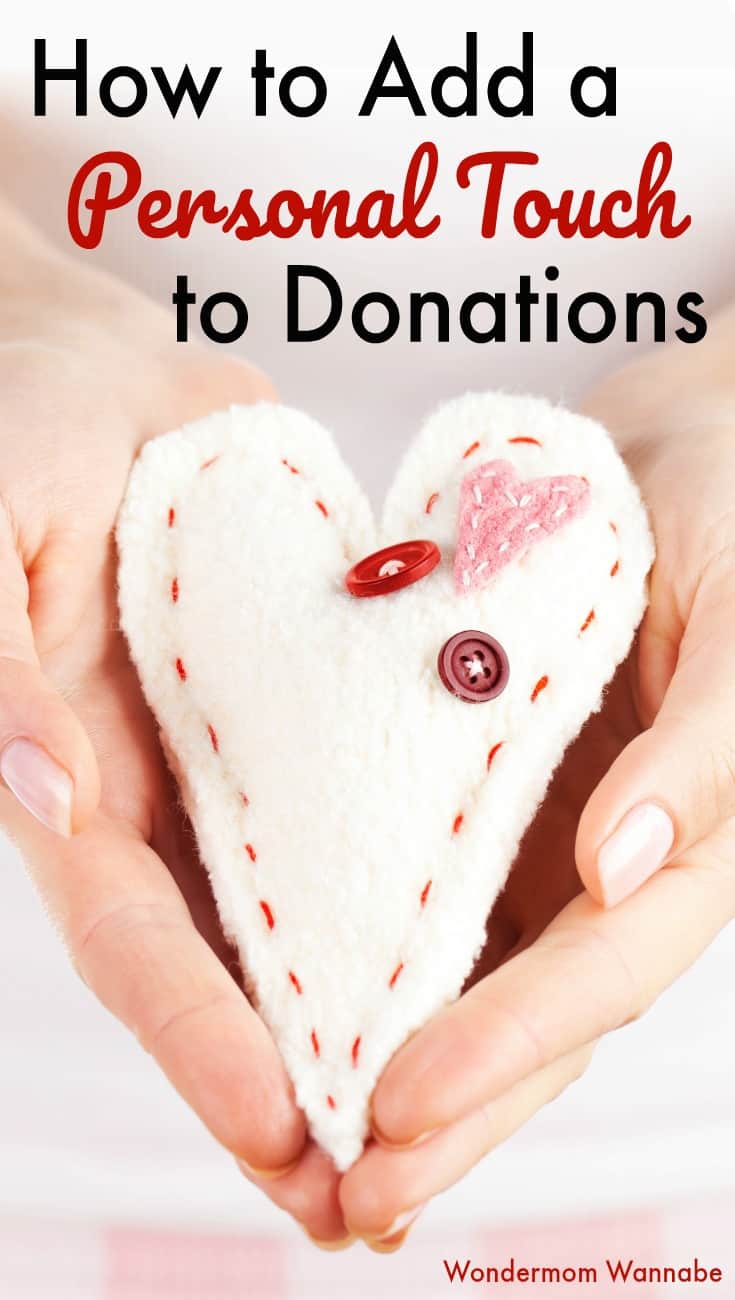 Special thanks to Walmart for sponsoring today’s post and for being my go-to store for one-stop, affordable shopping.

Recently, my youngest daughter and I devoted our mother daughter date time to brainstorm, shop, and create a meaningful random acts of kindness. Together, we decided to put together a bag of essentials that we could donate to a shelter for a homeless child. Most importantly, we wanted to add a personal touch to the donation to make the child feel special.

Adding a Personal Touch to Donations

We wanted to make our donation personal so that whoever received it would experience the joy of having something that someone had created with care just for him or her. Since we wouldn’t know who would receive it though, this posed a challenge.

We decided that if we made some of the items ourselves, the extra time and effort could help convey our care and affection to the recipient. So, instead of buying a gift bag or reusable bag to hold our donated items, we decided I would make the tote bag.

My daughter wanted to contribute something handmade as well. She wasn’t sure what it would be, but we hoped we’d find some inspiration once we got to the store.

We hoped that our homemade items would add a personal touch to the donation. We wanted the child who received it to know he or she was worthy of someone else’s time and attention.

Our general idea was to put together items that a child in a homeless shelter would appreciate receiving. We knew the child would need some essentials and we also wanted to include some fun items the child would enjoy too.

Since we wanted most of our time to go into creating the gift, we didn’t want to spend all our time shopping. So, we went to Walmart where we knew we’d find everything from personal hygiene items to kids crafts and activities. We could get everything we needed at one store and spend the rest of our day crafting and assembling the gift.

Because this was our mother daughter time, my daughter was an equal partner in the decision making. She loves Minions and wanted to share the joy of those adorable characters with another child. As a result, whenever an item we chose had a Minions version, we got it.

In a way, sharing her love of Minions in the donation was my daughter’s own way of adding another personal touch to the donation.

We had already decided I would be putting my rarely used sewing machine to use. As a crafting wannabe, I had bought the Brother Project Runway Sewing Machine a couple years ago when I declared we would be having “homemade Christmas.” [Note: That was one of our most memorable holidays, but largely due to the fact that collectively, my family has the craft ability of the average kindergartener.]

Thankfully, on our walk back to the sewing section at Walmart (where we were headed to pick up fabric), we passed through bedding. A colorful end-cap display of pillowcases caught our eye. I realized that if I started with a pillowcase, my tote bag would be halfway done already!

That was very appealing to this do-gooder with limited crafting skills! My daughter picked out one she liked best and I bought another 2-pack to experiment on, just in case.

In the kids arts and crafts section, we found a sewing kit for kids. This was perfect! My daughter could sew something for our donation too and pick up some basic sewing skills in the process. 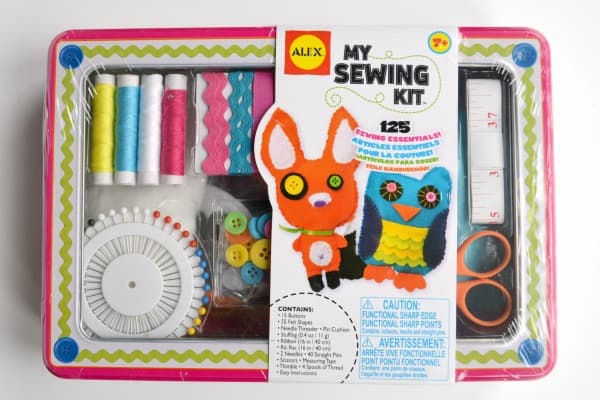 Next, we wanted to buy some items we knew a child in a shelter would need. We thought colorful, character versions would be more fun to receive than plain items that are usually donated to shelters.

So, in the dental hygiene aisle, we picked up a Colgate Minions value pack that included a powered toothbrush AND regular toothbrush, toothpaste, and fluoride rinse. My daughter thought it was so great, she added it to her Christmas list!

Then, we headed a couple of aisles over and picked up some children’s vitamins (Minions-themed, of course).

After we’d chosen some essentials, we beelined for the toy section to find some fun things to include. The trick was to find items a child would enjoy, but wouldn’t take up a lot of space or have lots of small pieces to keep track of.

My daughter insisted EVERYONE loves Play-Doh and this satisfied both of our requirements. Later, a friend told me about this color-changing fidget putty, which also would have been a great choice.

Another fun activity that met our criteria was coloring. My daughter picked out a couple of coloring books and we also bought a pack of crayons.

In the same aisle were the Grab & Go play packs. Since there was a Minions one, we obviously had to get one.

Putting It All Together

Pleased with our selections, we finished up our shopping and came home to get to work. My daughter immediately opened up her sewing kit and started working through the instructions. 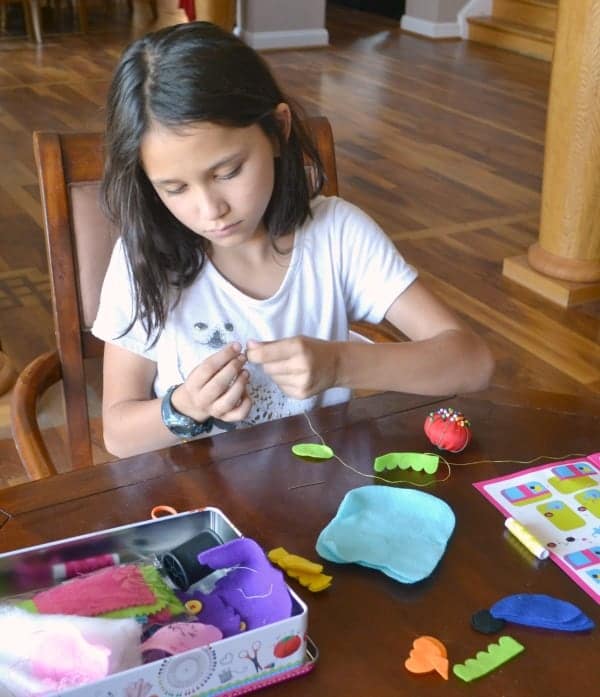 I set up the sewing machine and opened up this pillowcase tote bag tutorial on my phone. I took out one of the pillowcases we weren’t using for the donation and did a test run. 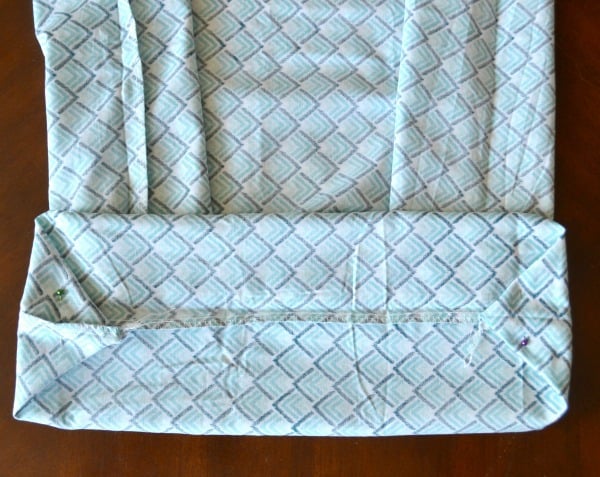 All went well, so I moved onto the pillowcase my daughter had chosen. Meanwhile, she had already finished her first item (she was also doing a test run).

When we were done with our crafts, this is what we had: 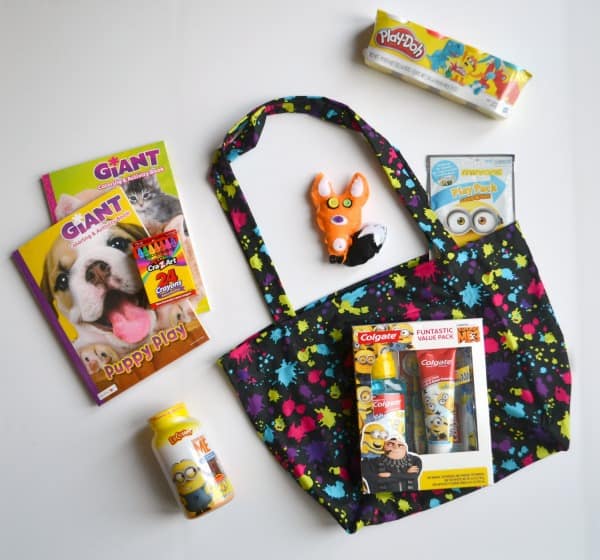 My daughter made a card to put in the bag with a personal note to the child who received it. Then, we delivered it together to a local shelter for victims of domestic abuse.

To find a shelter near you, click the links below:

Whether you craft something, or simply include a handwritten letter, including items you make yourself is an easy way to add a personal touch to donations. Sometimes reminding others that we genuinely care about them as people, not just as a tax write-off, is an act of kindness worth far more than money or goods.

If you want even more ideas, check out this post with over 200 ideas, Random Acts of Kindness series.