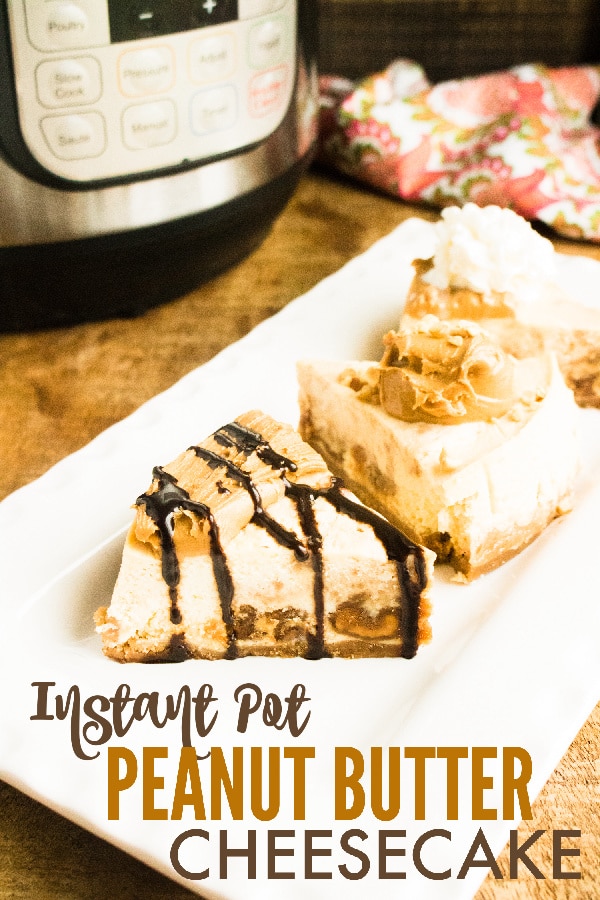 After drooling over all the Instant Pot cheesecake pictures on Facebook, I finally decided to make my own. My first attempt was this Instant Pot Peanut Butter Cheesecake.

The result was so amazing, I think I’m going to have to start running more often to work off all the cheesecake calories I’m going to be eating.

Why Make Cheesecake in an Instant Pot

Despite all the luscious photos of Instant Pot cheesecakes I was seeing online, I put off making one for a long time because of all the IP cheesecake fails I saw pictures of. I’ll be honest. I was intimidated.

It appeared that it was just as easy to create a disaster as it was to create a masterpiece. After reading a lot of comments and articles, I found these helpful tips for making cheesecake in your Instant Pot from Amy & Jacky to be everything I needed to know to tackle this feat.

You still have to mix the ingredients in a separate bowl and construct the cheesecake in a springform pan. The cook time ends up being almost the same too when you account for how long it takes for the pot to come to pressure.

I decided to attempt it mostly out of sheer curiosity. I knew this appliance was a dynamo, and this not-so-obvious item to make in a pressure cooker would really cement its superstar status.

Aside from testing the wide variety of Instant Pot uses, another reason you might choose your IP over your oven is cost. As I’ve mentioned before, Instant Pots are remarkably fuel efficient relative to other kitchen appliances.

If you’re cooking in the summer, your cost savings are even higher since your Instant Pot won’t heat up your home while the cheesecake cooks. That means your air conditioner won’t have to work as hard to keep the house cool.

Of course, in cold-weather months, this is actually a reason to oven-bake your cheesecake instead of using your Instant Pot.

As I mentioned above, I followed all of Amy & Jacky’s IP cheesecake-making tips. The two big ones are to work with ingredients that are at room temperature and to use a hand mixer, not a stand mixer.

Don’t ignore this advice! In the online forums, those two things alone account for most of the cheesecake fails.

If you adhere to those two rules, you should be delighted with your results. The steps to make this Instant Pot Peanut Butter Cheesecake are really quite simple.

Step One – Make the Crust

First, spray the inside of a 7-inch springform pan with nonstick cooking spray. Then, combine graham cracker crumbs with some sugar and melted butter to make the crust and press it into the bottom of the pan.

Line the edge of the pan with parchment paper.

If you want to make a Peanut Butter Cup Cheesecake, add some peanut butter cup pieces to the top of the crust before proceeding to the next step.

Next, cream together cream cheese and sugar in a large bowl. Then, mix in two eggs one at a time.

After that, add vanilla extract and sour cream. Mix until smooth.

Carefully run a fork back and forth over the surface of the cheesecake to remove air bubbles. Cover the pan with foil.

Set the trivet in the bottom of your Instant Pot. Then, pour two cups of water into the pot liner. Craft a sling out of aluminum foil and use it to lower the cheesecake pan into the Instant Pot.

Secure the lid and set the valve to sealing. Cook on high pressure for 35 minutes and let the pressure release naturally for 12 minutes after the timer goes off before releasing the rest of the pressure.

Use the foil sling to carefully lift the pan out of the Instant Pot. Let the cheesecake cool completely, then place it in the refrigerator for at least 4 hours to chill before serving.

When ready to serve, release the cheesecake from the pan and peel away the parchment paper. Slice and serve. You can top individual pieces with peanut butter, whipped cream and/or chocolate syrup.

Here is the recipe card with the exact measurements and detailed instructions so you can make your own Instant Pot Peanut Butter Cheesecake. 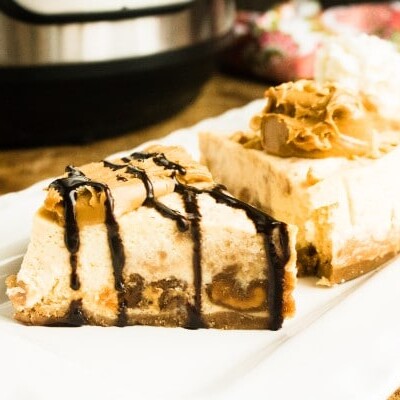