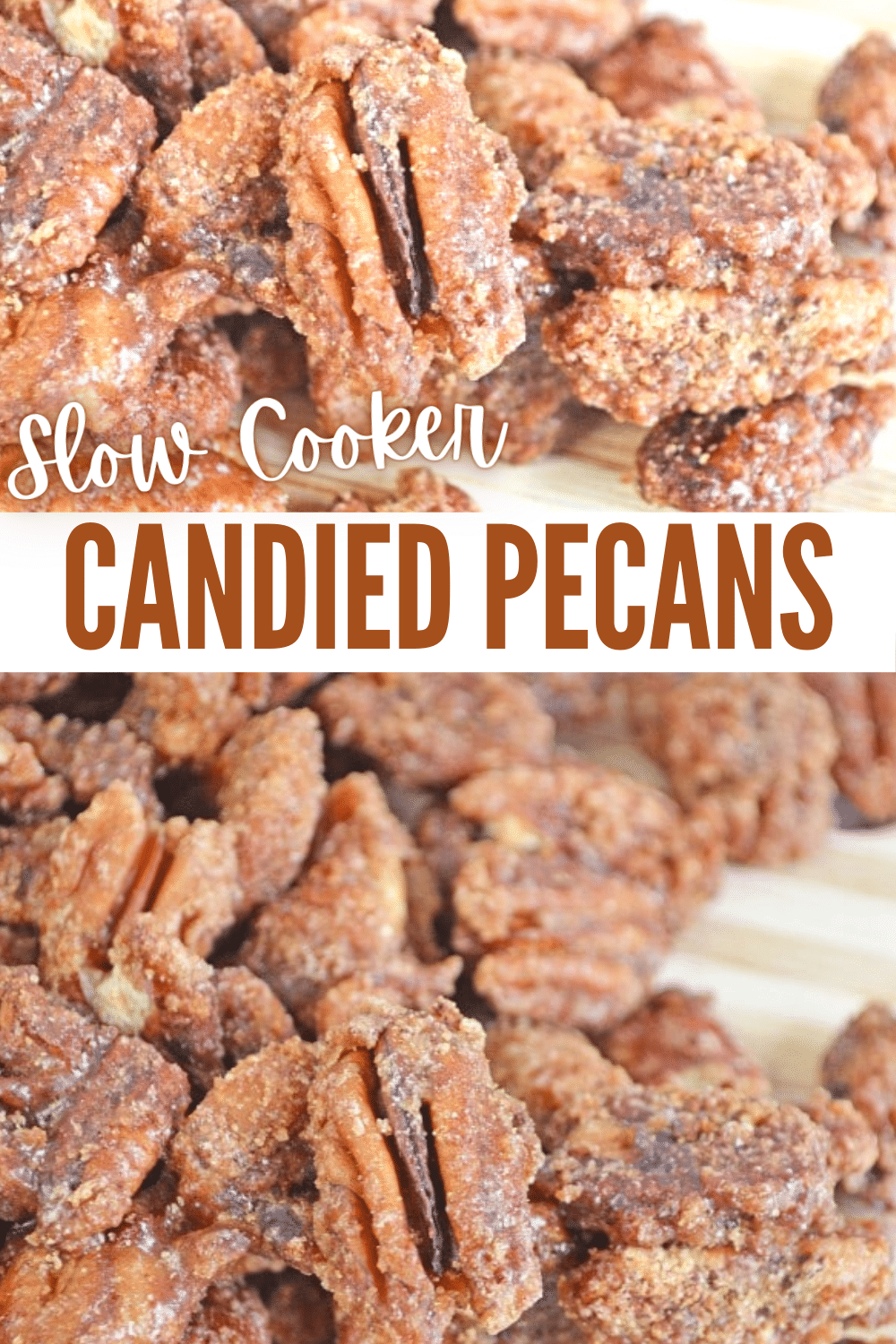 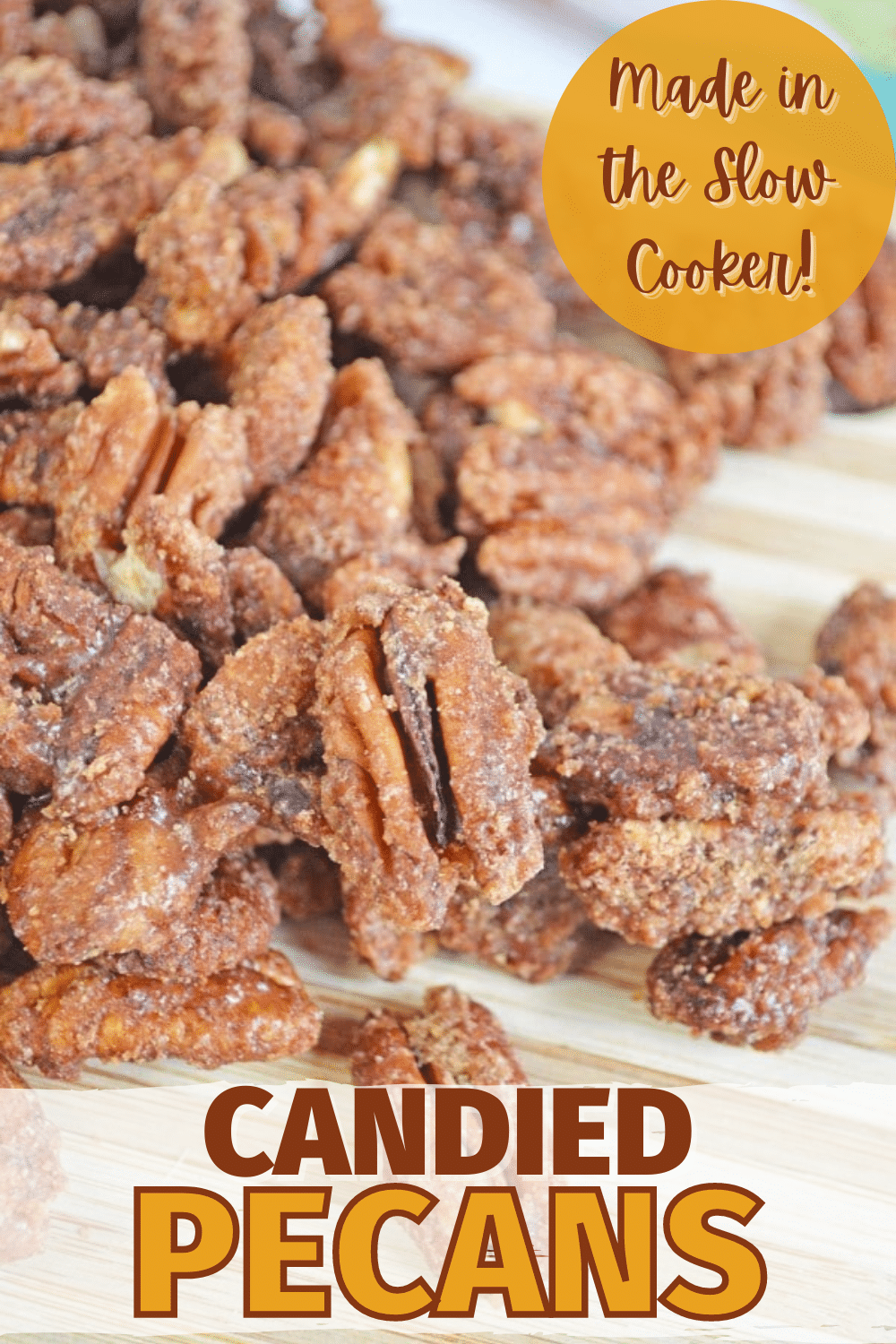 These Slow Cooker Candied Pecans are not only a delicious treat, but they also make an easy (and tasty!) gift for others. By making them in a Crock-Pot instead of the oven, you also free up some time since you’ll have to stir the nuts less often to get them to cook evenly.

I don’t know why, but I didn’t get to taste candied pecans until I was an adult. I was at a fair and they smelled AMAZING so I paid the outrageous price to see if they tasted as good as they smelled. They did!

A friend of mine told me how to make them myself at home. The process involved coating the pecans and baking them on a parchment paper-lined baking sheet at a very low temperature for an hour. I just had to stir them every 15 minutes to make sure they cooked evenly.

Ok, so that really does seem easy, right? And it is. Unless you have my personality and hate hanging out in the kitchen to be a slave to the kitchen timer.

I discovered that if I made the pecans in my slow cooker instead, I didn’t have to stir them nearly as often. And they turn out just as good!

This is the MOST important step if you don’t want to spend the rest of your day/evening cleaning out the slow cooker after you’re done. Make sure to spray the entire interior of the crock with non-stick cooking spray.

Next, mix the vanilla extract together with the egg white in a large bowl.

Add the pecan halves, sugars, and cinnamon to the bowl.

Now it’s time to add the pecans to the slow cooker.

Cook on low for two hours. While it’s cooking, you’ll want to stir it twice (roughly every 40-50 minutes). After two hours, add 1/4 cup of water and give the pecans a stir.

Cook for another hour, stirring after 30 minutes.

Line a baking sheet with parchment paper, then pour the pecans onto the sheet. Let them cool at room temperature for at least one hour. As they dry, the glaze will harden to form that delightful crisp, sweet candied shell.

What to Do With Candied Pecans

Candied Pecans are a delicious snack on their own. They are also a wonderful addition to salads or to a Simple Charcuterie Board.

You can place them in treat bags to use as party favors or as a tasty surprise for friends or co-workers. Or, add a generous portion to a mason jar to create an easy, but welcome gift for any occasion.

Excited to make up your own batch of slow cooker candied pecans? Here are the exact measurements and printable recipe card: 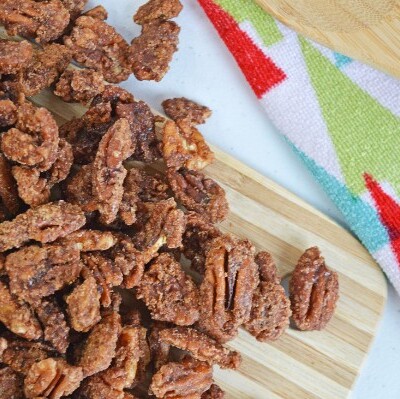 Store in an airtight container in the refrigerator.

It depends what you consider healthy, lol! The best option is plain nuts as they are very healthy for you. However, candied nuts have a significant amount of added sugar so they aren’t as healthy. They are much healthier than other options, though!

When do candied nuts go bad?

Candied nuts can last up to two months depending on how you store them! Put them in an airtight container and they will last a week at room temperature, 3 weeks in the fridge, or two months in the freezer.

How do you keep candied nuts crisp?

In order to avoid getting sticky and gooey candied nuts, you want to make sure there isn’t too much moisture. This means drying them out during cooking and storing them in an area that isn’t too humid. Humidity will take away the crisp texture and make them very sticky.

Don’t forget to pin this recipe for later so you can make it again and again!