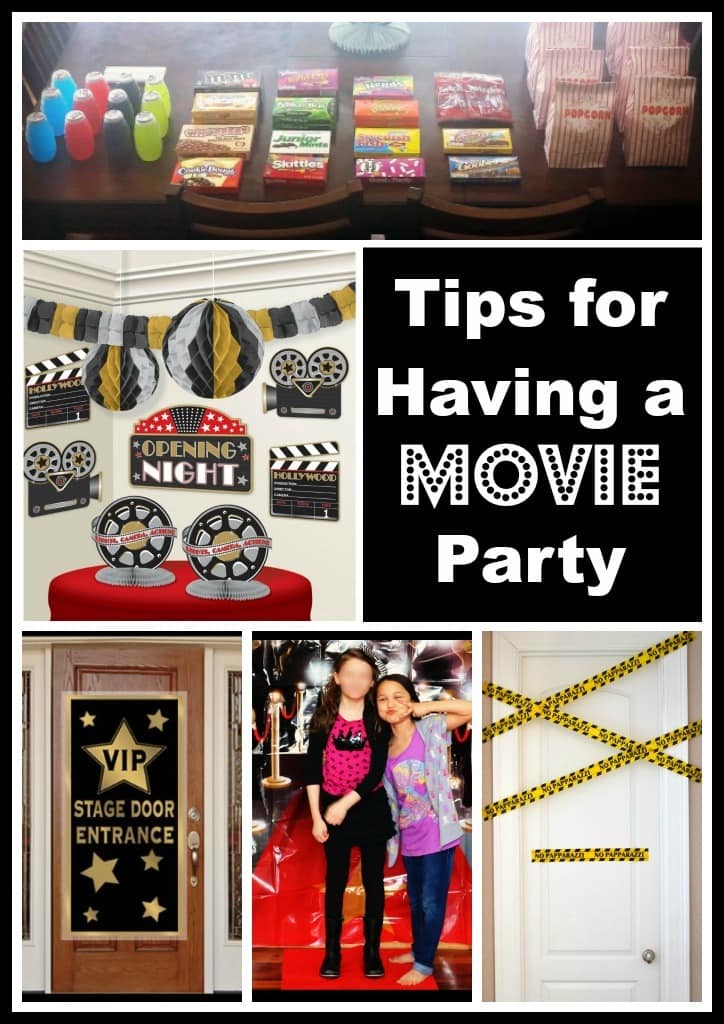 For the past few weeks I’ve been talking about my daughter’s upcoming birthday. Well, we are finally on the other side of it so today I am going to share all the details of the party. I previously shared the Birthday Party Themes For Girls that I had found when helping my daughter choose. Ultimately, she decided that she wanted a more gender-neutral theme even all of her guests were girls, because she fancies herself a tomboy. So, we decided to have a “Movie Party.” Secretly, I pushed for this idea because I thought of the blissful silence I would enjoy for the duration of the movie (i.e. Easiest. Party. Ever.).

Decorations From The Party Store

We hit the party store and picked up invitations that looked like movie tickets, some decorations, and a red carpet.

I used some “No Papparazzi” plastic tape to label the bathroom door, because no one wants a camera crew following them into the ladies room!

As guests arrived, I had them walk the red carpet and pose in front of the backdrop with my daughter. A fun variation on this would be to pull out some fun props like feathered boas, funny glasses, costume jewelry, and hats so the kids can get dolled up for the photos.

The kids had to earn tickets by playing games. I chose games that didn’t have winners and losers. The kids won tickets just for participating. Typically, I’m all about the spirit of competition, but this was a party AND I needed all of the kids to earn enough tickets to “buy” concessions so that I wasn’t stuck with a bunch of popcorn and candy. Since the theme had to do with movies, I chose these games:

About a month ago, we decided that because we enjoy family movie night every week and we all LOVE popcorn, it was a good idea to buy an authentic popcorn maker. We found this one at Amazon for a price we were happy with. We needed a stand-alone unit because though we have plenty of floor space, counter space is in short supply.

Otherwise, for almost half the price, we probably would have gone with this one:

Truth being told, justifying its purchase was probably another contributing factor to pushing for the movie party theme. The smell of the freshly popped popcorn definitely contributed to the movie theater ambiance.

We popped enough popcorn to fill up 10 popcorn bags, one for each of the kids. Then we set up the concession stand. I had purchased an assortment of theater-style boxed candy at Walmart and Hugs Juice bottles. Though Hugs probably wasn’t the healthiest beverage option, because the straws are designed to puncture the foil lid and unlike pouches, the bottles stand easily on their own, the risk of spills was the lowest with this drink choice.

For the movie, we had actually picked up a few different choices from Redbox and let the kids vote. Even if you don’t want to give kids a choice, I highly recommend having a couple of movies as backup just in case there is something wrong with the disk, or if the kids lose interest a few minutes in.

After the movie, we gathered the kids in the “Celebrity VIP” area that we had taped off for cupcakes.

I purchased smaller, sturdier popcorn bags to use as favor bags which we filled with glow sticks, silly putty, flavored lip balm, jump ropes, and mini coin purses. I didn’t put any candy in because I was already feeling guilty about sugaring them up with the theater candy and cupcakes. If I was doing this party for older kids, I probably would have gotten some cute gift bags and called them “swag bags” instead.

Depending on your budget, you can really play up the theme and invest in some stanchions and VIP passes like these:

The nice thing about this theme is that it works for just about any group. It’s not gender-specific so it’s just as fun for boys as it is for girls. By switching up the games and party favors, you can easily adapt to any age group. You can even use most of the decorations and props for an adult Oscar awards party or a Hollywood-themed party at Halloween.

7 thoughts on “Tips for Having a Movie Party”