This shop has been compensated by Collective Bias, Inc. and its advertiser. All opinions are mine alone. #PawsToSavor #CollectiveBias

I love my pets, which is why I put up with the challenge of trying to keep a clean house despite lots of fur. And despite the fact that I have two dogs and only one cat, I realized long ago that my smallest pet was the largest contributor to fur throughout the house.
Because my dogs tend to play outside or lounge in their dog beds, there was little evidence of their furry presence elsewhere in the house. My cat, on the other hand, wanders the house all day and night and settles herself into any spot that suits her fancy, resulting in cat fur everywhere from our dining room chairs to behind my computer. It finally occurred to me that if I could train her to cozy up in designated spaces, it would reduce my time spent cleaning up fur from all over the house. Thus, armed with my hatred of cleaning, I set upon the unlikely course of trying to train my cat. Surprisingly, it was easier than I expected so today I am going to share with you my secret to creating cat lounge areas.

I knew I was facing an uphill battle trying to train Lumen, my strong-willed cat so I decided from the get-go that I was going to try to incorporate her natural behavior and preferences. Before we began training, her favorite lounge areas were: 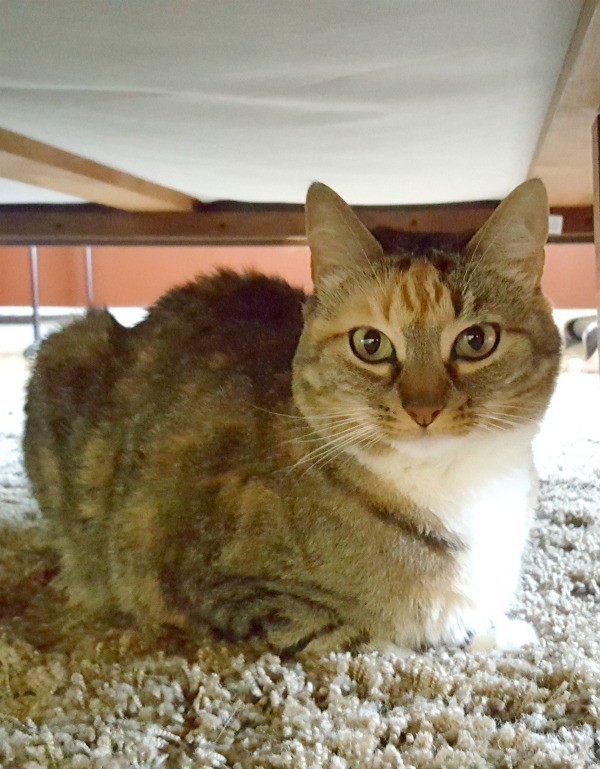 Although she was choosing furniture and spaces throughout the house, her favorite spots had a lot of things in common.

Establish YOUR Favorite Spots for the Cat

Before I could start training my cat, I had to have a clear idea of where I wanted to allow her to lounge. We have a large house so I wanted to give her a few options. After much deliberation, I settled on three:

Since I was trying to replicate my dogs’ behavior of laying in their designated dog beds, I was hoping to find a mobile cat bed. My idea was to try different “beds” to see what material my cat liked best so that I could use it to lure her to the spots where I wanted her to lay. I tried many things:

And then my cat, in typical I-call-the-shots-around-here fashion, chose the throw blanket from my husband’s chair as her favorite bed. We accidentally left it laying on the chair one day (instead of folding it and hanging it over the back of the chair as usual) and came back to find that Lumen had claimed the blanket as hers. She abandoned all of her other preferences (warm, confined spaces well out of the dogs’ reach) to lay on this blanket. As you can see from her expression, she was completely unapologetic and had no intention of relinquishing her claim. 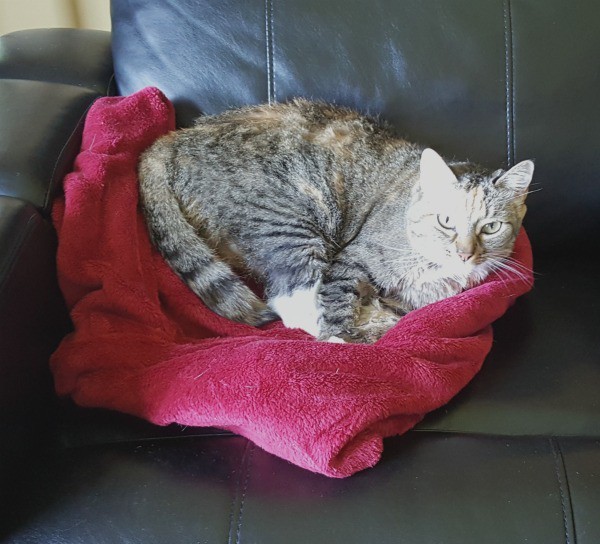 Once you’ve found your cat’s security blanket (or towel or shirt), you can use it to lure him or her to the spots you’ve deemed cat-appropriate. I placed the blanket in the basket under my desk to draw Lumen there instead of my keyboard. 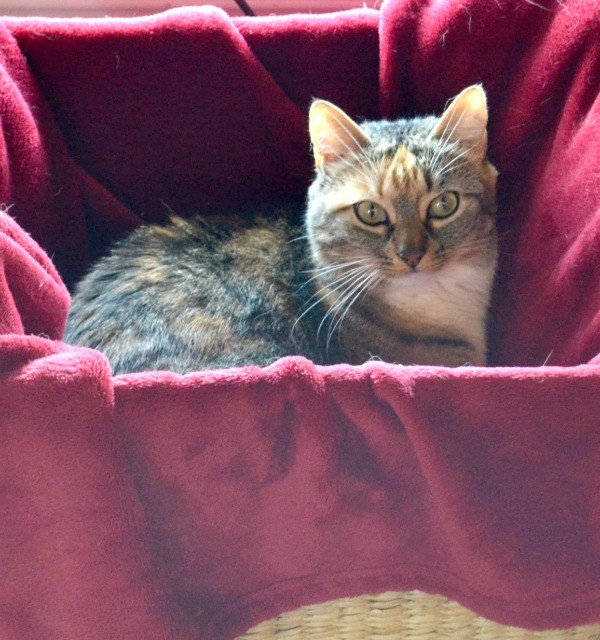 There are many aspects of pet ownership that remind me of parenting, and trying to get my cat to do what I wanted instead of what she wanted, was one of them. So, I pulled out one of my parenting tricks and decided to bribe Lumen.

You see, the problem with the blanket is that it could only be in one place at a time and I wasn’t going to go out and buy two new blankets for the sake of training (which is why I was pushing for the old towels, t-shirts, blankets and pillows earlier). And unless I moved the blanket when she wasn’t around to see it, she assumed we were playing and she would latch on to one end of the blanket and fight me for it.

Because my cat is a lot like me (or so my family keeps telling me), although she is strong-willed, she’s also super fickle. She is NOT a creature of habit. She loves to get new toys, new treats, and most of all, she loves when I buy her new cat food (OMG, she is like me! – I’ll do almost anything for a new snack or delicious meal).

I decided on Purina® Pro Plan® Savor Shredded Blend since it’s made with ONLY ingredients intended to contribute to cat health, with optimal levels of protein and fat and rich in antioxidants, omega fatty acids, vitamins and minerals. And because the Savor line was specifically designed to be delicious to cats, I knew she was going to love it. And boy, did she! The first time I fed it to her, I tried to pick up the bowl to move it to one of the lounge spots I was trying to train her to use and she batted my hand away. 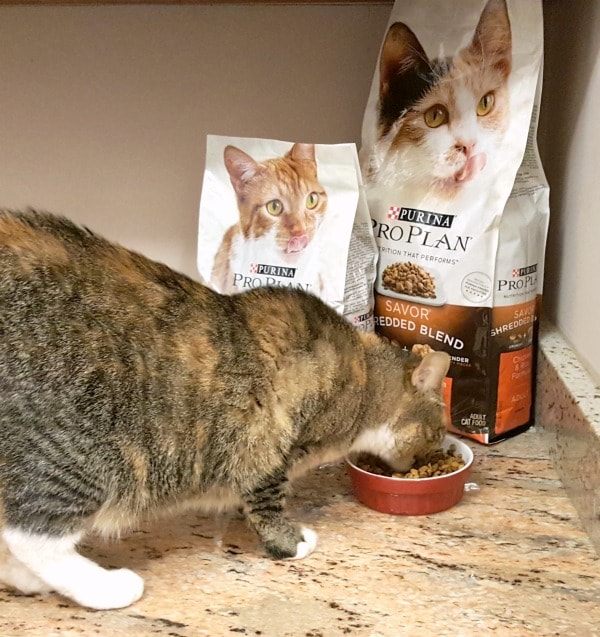 So, instead I decided to add a few pieces of food to the places I wanted her to lay hoping the smell would draw her there and provide some positive reinforcement. It worked like a charm.

Watching her discover the food in her cat spots always made me smile. I imagine it’s what I look like when I find a piece of chocolate hidden in the bottom of my purse or at the back of the pantry.

Armed with the blanket and Purina® Pro Plan® Savor Shredded Blend cat food, it was pretty easy to get Lumen to use the spots I had chosen for her. Unfortunately, she was still using some of her old favorites too.

Each time I would find her in an unapproved spot, I would get her food bowl and lure her to one of the approved spots. I wanted her to willingly relocate.

On the few occasions that she wasn’t hungry enough to be tempted by food, I would simply pick her up and move her to an approved spot. After two weeks of relocating her, she finally got the idea. Now she very rarely lounges around anywhere but her three designated spots, even though she wanders the house all night.

If I was able to train my stubborn, temperamental cat, I know anyone can. I hope for your sake that your cat is more amenable to an old t-shirt rather than your favorite throw blanket. And if you want to try my training tips, head to PetSmart between 5/31 and 7/5 to stock up on Purina® Pro Plan® Savor® Shredded Blend to take advantage of this offer:

Look for this display: 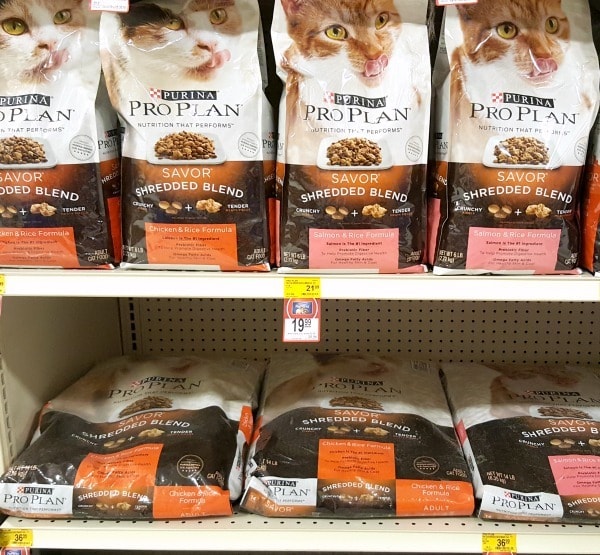