20 years ago I made the smartest decision of my life. I accepted a marriage proposal from a U.S. Marine even though married life with him would mean setting aside the carefully planned career I had prepared myself for. My mother was terrified that I was throwing away my chance for a successful and happy future, since her own marriage to a military man had left her a single mother of two in a foreign country.

Her fears seemed pretty rational considering me and my husband-to-be were an unlikely pair. We were opposites in so many ways. He was from a large family, whereas my family was quite small. He was the outspoken life of the party and I was the shy wallflower.

While I spent hours each day working on homework and studying striving for A’s, he spent minimal time on any academic activities content to be an average student. He was an outdoorsman. I was a bookworm.

If dating sites had existed at the time, I doubt we would have ever been matched with one another since we seemed to share no common interests. As it turns out, we were perfect for one another.

The Principle of Growing Center

My husband believes in a principle he refers to as “growing center.” In other words, when two people spend a significant amount of time together, their personalities slowly alter over time so that they eventually meet in the middle. The principle certainly applied to us.

I mellowed him out a bit and he made me more adventurous. It also makes us a good parenting team since my tendency to be overprotective is tempered by his laissez-faire attitude.

The Effect of Growing Center in Friendships

The principle isn’t limited to marriage though. I have found it to be true in my friendships. Consequently, I’m pretty picky about who my close friends are.

For a while I was friends with a woman who was very funny (a characteristic that is important to me in a friend). Once we started spending more time together I realized that unfortunately, there were many other facets to her personality that I didn’t enjoy or respect. I tried to overlook them because I wanted to be a good friend and I didn’t want to be judgmental.

Here’s the problem with that—in order to be a good friend, I needed to be supportive of her. Since I couldn’t stand behind some of her actions or beliefs, we had to end our friendship. She didn’t want to be judged (which is how she felt when I wouldn’t back her up) and I didn’t want to compromise my values. Neither one of us wanted to grow center because we were too far apart in traits that were firmly rooted for each of us.

Choosing How You Want to Grow

From this experience, I learned to pay closer attention to the people with whom I choose to spend my time. As Jim Rohn said, “You are the average of the five people you spend the most time with.” So, I try to surround myself with people who I respect, enjoy, and admire.

As I mentioned earlier, a sense of humor is high on my list of priorities and because I ooze sarcasm, that’s a big must-have quality as well. I also admire honesty, loyalty, and strength of character (which usually go together).

Because fitness and health are important to me, I also tend to befriend women who value these things as well. I hope that by spending time with people who possess these qualities I will become stronger in those areas.

Frankly, I’m a bit of pessimist so I should probably throw optimism in as a criteria too, but so far all my BFFs are just as pessimistic as I am. We mask it with our ongoing sarcasm and laughing.

Your own list of admired traits might be different than mine (I certainly hope so because I’m possessive of my friends). Perhaps you haven’t ever considered what traits your friends have in common, if any. At some point in your life, you should figure out what is on your “ideal friend” list because whether you mean to or not, you will end up taking on the traits of your friends. 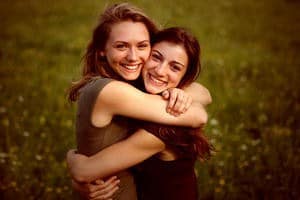 Yes, it really is that easy to become confident, healthy, or compassionate. If you surround yourself and spend time with people who have those characteristics, you will eventually develop them too.

Conversely, if you spend your time with cruel, gossiping, dishonest individuals, you will soon behave the same. So, if you aren’t happy with yourself or your life, pay attention to the people who are prominent in your life. If the things you don’t like about yourself are traits you are picking up from them, make some new friends.

25 thoughts on “Want To Be A Better Person? Pick Better Friends”