Meteor showers are amazing and beautiful to watch.  Almost anyone will enjoy seeing the meteors streak across the starlit sky.  However, it can be hard to keep your kids entertained until the show starts. Because of this, here are five different things you can do to keep your kids entertained, excited and learning about the stars and meteors all through out the night. 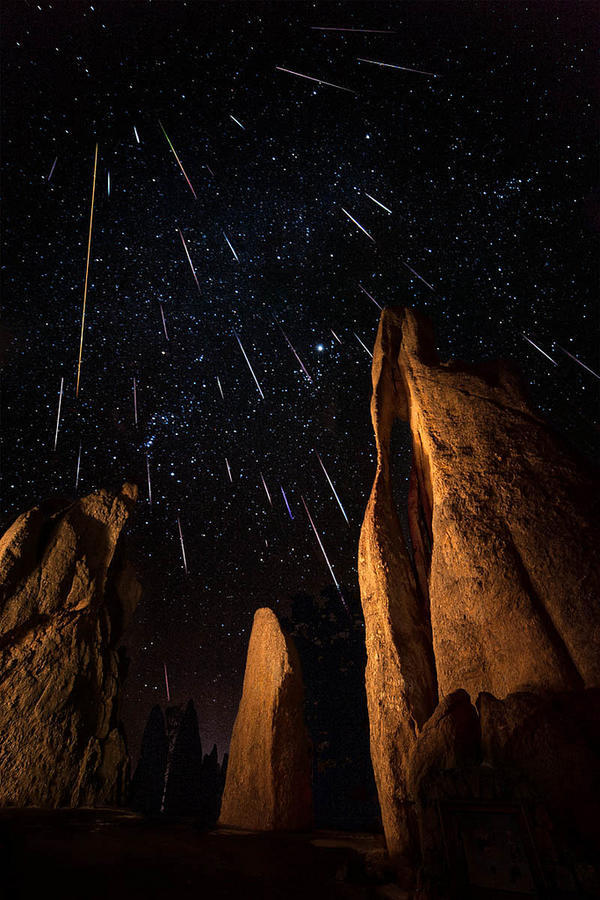 A few things to keep in mind before having a meteor shower party:

While it is still light out, give your kids some background about the constellations that they will see during the night may be good way to get them learning about the night sky. Pick a few major constellations and teach the kids about the names, history and shape of each one. Then by scavenging around your back yard or the campsite, they can find objects like rocks, pinecones or colorful leaves that can represent different features of the night sky. The kids can use the objects they found to recreate their favorite constellation (you will have to define what makes a star, a moon, etc. so everything remains consistent), then they can use the brightest objects that you didn’t mention as planets or the moon. Everything should be placed in the exact positions that they will appear while watching the meteor shower.

Because everyone will be up late, snacks are important. Before the party, pick up a box of plain donut holes. The kids are going to turn these into their own personal meteor desserts. First, they can dip the meteors into something sticky sweet and edible that can hold other things against it. Then they roll them in toppings like graham cracker crumbs, chocolate chips, toffee crumbles or any other rocklike chunky topping that will taste good with a donut and make them look like meteors.

As an extra fun thing to do, you can create fun dipping sauces for your meteors.  Here are a few ideas.  You can dip the donut holes in raspberry “Jupiter sauce” jelly, marshmallow “moon” fluff, chocolate “black hole” sauce, and caramel “milky way” dip, or create your own fun versions.

By this point it should be dark.  While you are enjoying the meteors, kids can try their hand at creating their own shooting star light trails by using flashlights and a camera with the shutter speed set to at least 8 seconds (if you don’t have a camera that can do this, most smart phones can with cheap or free apps like Slow Shutter Cam).  Make sure you are somewhere as dark as possible, then put the camera on a tripod or other stationary object, and begin taking the picture. While the photo is being taken, the partiers can shine flashlights towards the camera and move them in the shape of their names, pictures or any other thing they want. No matter what they do, they will probably love the outcome and have an awesome photo to take home and upload to their computer then print out and hang on their wall.

By now the meteor shower is already in full swing.  Because it will appear as though all the meteors are coming from one point (if you are out during Perseids, it will be the Perseus constellation), it can be a fun competition to divide the sky into sections around that point. Each kid can choose which section they think will get the most meteors shooting across it, and then it will be their job to keep track through the night. At the end of the night, each kid can tally up their total to see who the best space prospector is, and maybe even win an extra meteor donut.

Because there are few things as incredible to see as shooting stars, the chance to witness hundreds or even thousands of them is a great opportunity. With a few creative and educational activities, besides making a wish, a meteor shower party can become an out of this world experience.

6 thoughts on “How To Throw A Meteor Shower Party”