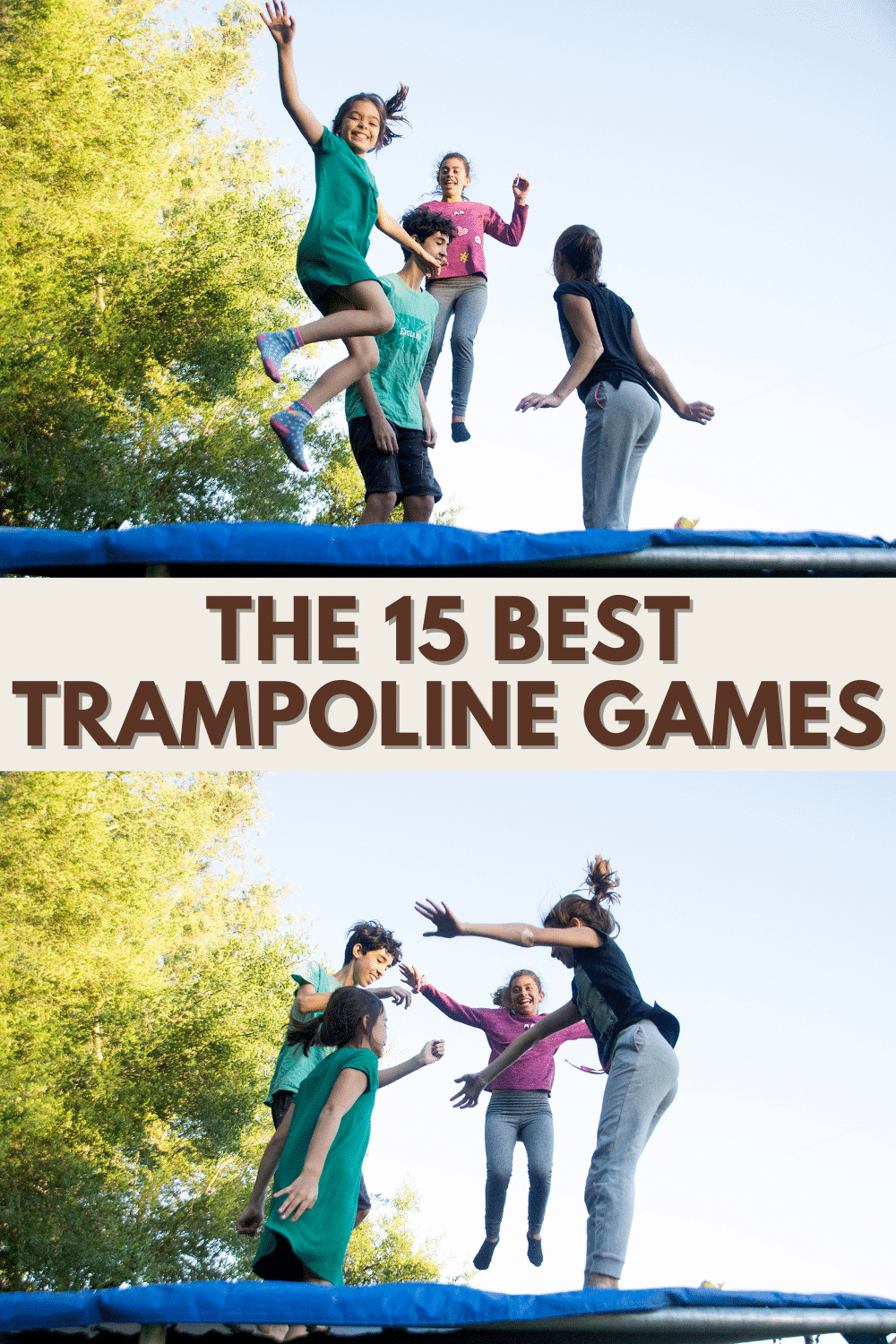 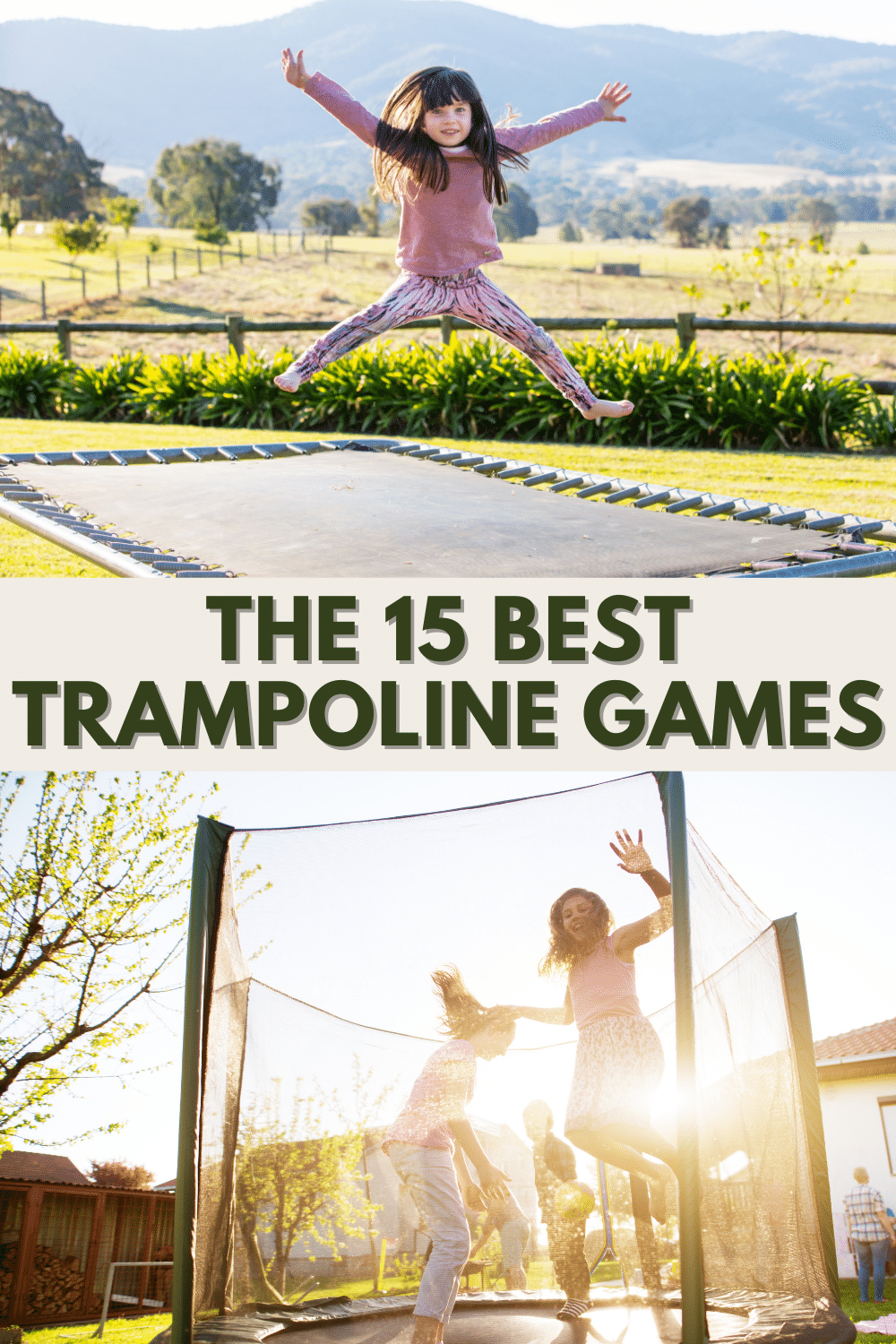 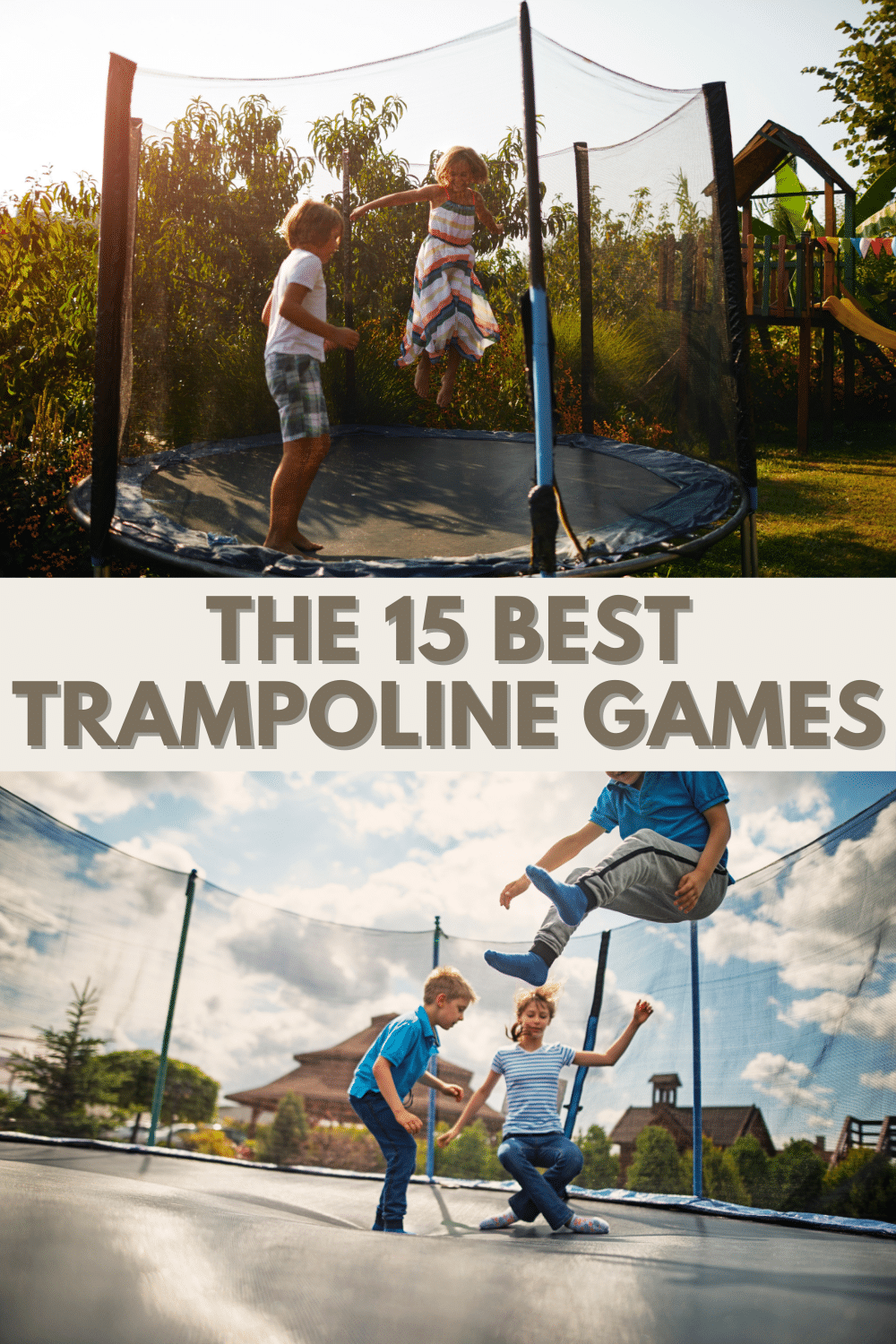 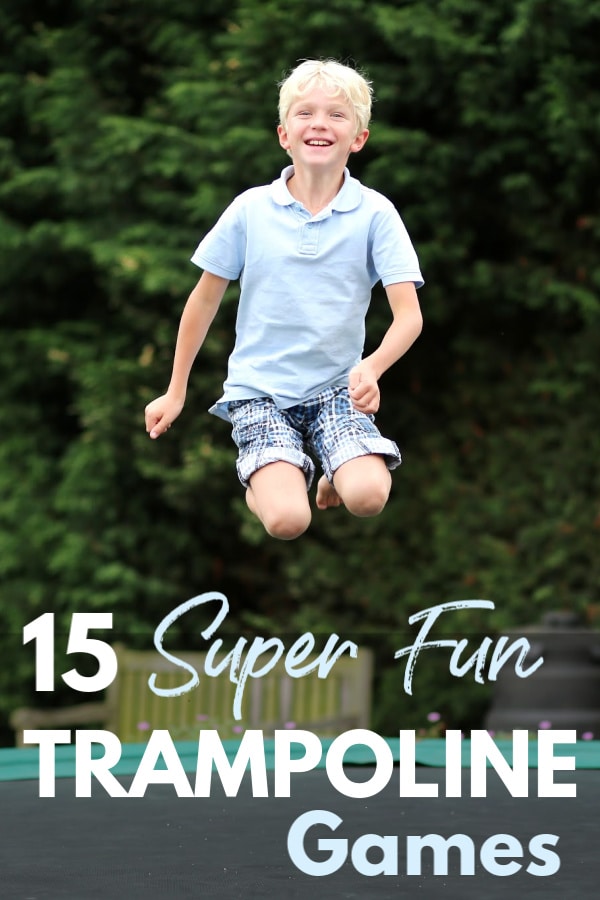 If you’re looking for hours of bouncy fun, you’re going to love this collection of the best trampoline games. With a net, without a net, two players or a whole group…you’ll find a game the kids will enjoy in the list below. 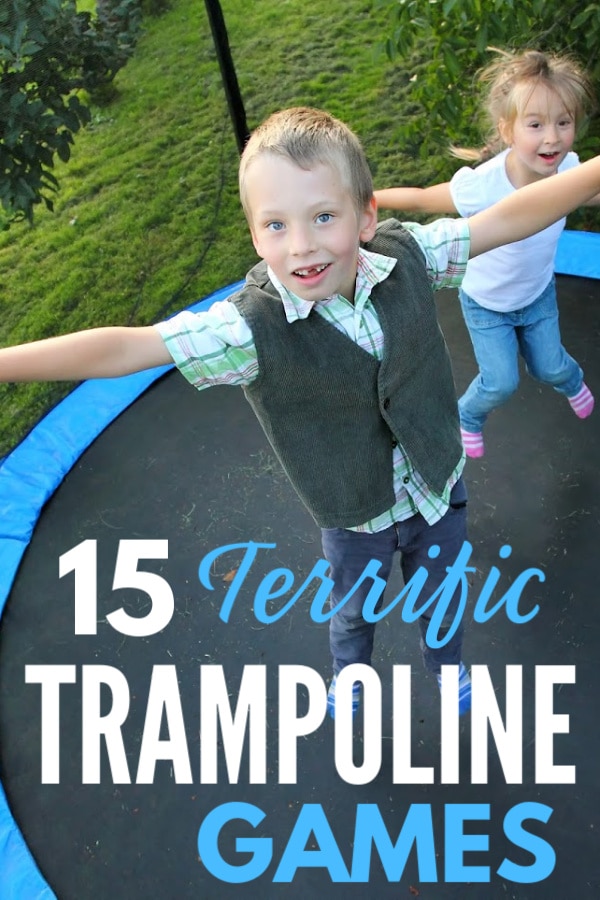 Owning a trampoline is such a fun way to get exercise and have some fun with the whole family. While some families shy away from a trampoline, thinking that it’s far too dangerous, the reality is that a trampoline can add so much fun and entertainment to your backyard.

Today I’m going to share some fun games to play on the trampoline so that you can enjoy more quality family time outdoors. Trampoline games are one of my family’s favorite outdoor activities so I hope to kindle that joy in your family too. 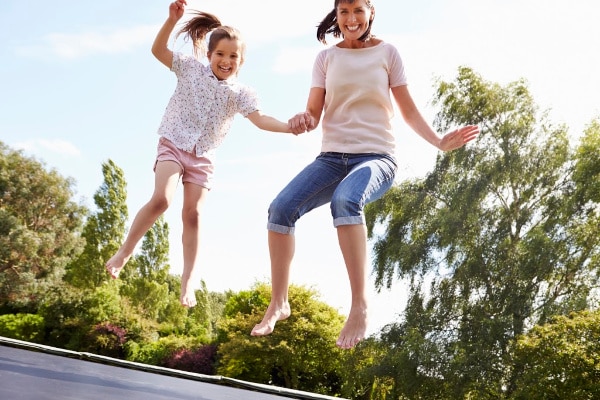 We’ve had a trampoline for 18 years. For a few years, we even had two!

Kids LOVE trampolines! I love them too since they encourage the kids to play outdoors and they get a ton of exercise in the process.

Below are their favorite trampoline games. Some of these are classics, others are new ones their friends introduced, and some are ones my kids made up with their friends.

The one thing they all have in common is that they’re tons of fun! I hope your kids and family have as much fun with them as we have.

Ring Around the Rosey

This is a classic game that takes on new life when played on the trampoline.

Kids will gather in the center of the trampoline and hold hands as they sing, “Ring around the Rosey, pocket full of ashes, we all do a ….” And each kid takes a turn yelling out some “trick” that each has to do. Watch as laughter ensues as your kids enjoy this fun trampoline game.

Monkey in the Middle

Another classic, but so much more fun on a trampoline! It’s much harder to keep the ball away from the monkey when the monkey can bounce several feet in the air to catch the ball overhead.

Popcorn (aka Crack the Egg)

This is a hilariously fun game! So the deal is that everyone is able to bounce but the trick is that they can only bounce their bum once and their feet once.

If they do more than once, as in they go up and down and up and down, well then they’re out. It’s best played with multiple kids, but you can play Bum Wars with a minimum of two kids.

One player throws a large beach ball in the air and yells “Cherry Bomb.” Everyone on the trampoline must try to avoid being hit by the ball without leaving the trampoline.

Players start with three lives. Each time a player is touched by the “cherry bomb” he or she loses a life. If the ball falls off the trampoline, every player loses one life.

Watch out for Poison Balls

Put some soft balls on your trampoline. The kids pretend that these balls are poison balls that they cannot touch.

The kids jump around and if they touch a poison ball then they have to sit out. The last person standing wins.

This is a fun game when you have a larger group and can’t easily (and safely) fit everyone on the trampoline at once.  In this version, you’ll pit defenders (who are ON the trampoline) against attackers (who stand OFF the trampoline).

Attackers throw medium sized inflatable balls at the defenders. If an attacker hits a defender, the two switch places. If the defender catches the ball, the attacker must sit down and is out of the game.

You’ll need a trampoline with the enclosure safety net to play this game. Like traditional soccer, players will divide into two teams and attempt to score a goal by kicking the ball into the opposing team’s goal. 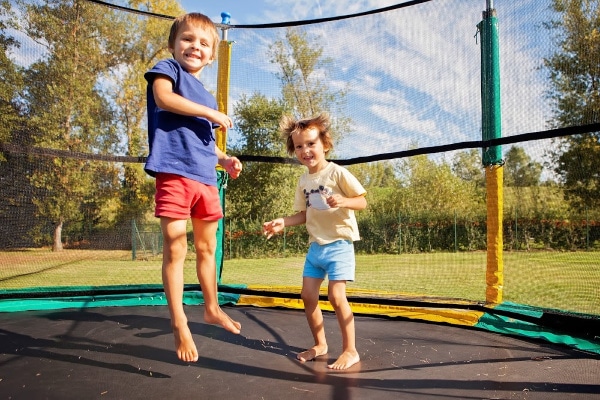 The goals are defined by two of the net poles and should be directly opposite each other across the trampoline. No need to play for 90 minutes. Simply play to see which team can be the first to reach a certain number of goals.

This is a fun game that not only gets everyone moving, but also exercises memory, creativity, and sequencing skills. Players stand in a large circle around the edge of the trampoline surface.

Decide who will go first. You can start with the youngest player, player with the shortest first name, the winner of the last game, or maybe just the one person who volunteers.

Players continue, moving clockwise around the circle, with each player adding a new trick to the sequence. When a player forgets one of the tricks in the sequence, that person is out. The game continues until only one player remains.

This is a game my kids made up and it’s super quick and easy. I’m not sure why they call it Tips, but since I want them to get full credit, I’m leaving their name intact.

All you need are a trampoline, a beach ball, and two or more players. Basically the players are simply playing catch.

The challenge comes in with the single rule. Players cannot be touching the trampoline while holding the ball. That means they must catch the ball mid-jump and throw it to another player before they land.

This is one of my kids’ favorite indoor games but is even more fun on a trampoline. To start, players say “3, 2, 1, Ninja!” Then, they jump in the air and strike a pose when they land.

For the game, each player has four body parts that are keeping them alive in the game — both arms and both legs. The object of the game is to take out other players by coming in contact with one of their four parts until all players arms and legs have been eliminated from play.

To play, the players take turns  (order should be established before the game begins) making one movement in attempt to hit one part (an arm or leg) on someone else.

The player being “attacked” can make one defensive move to avoid being hit. For example, he or she can move an arm into a new position or jump back. No other players are allowed to move during the turn. 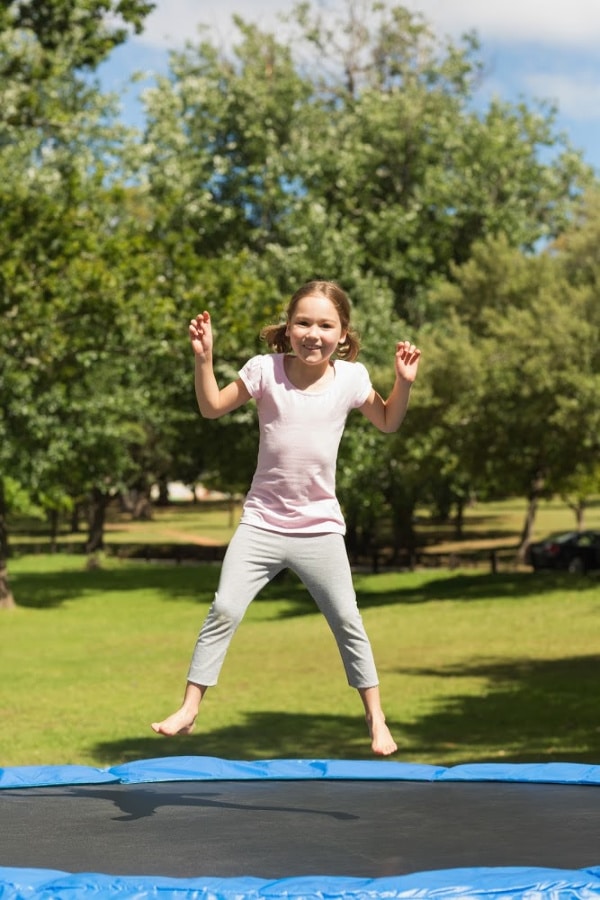 This is one my kids’ friends taught them. It was new to us, but is apparently pretty well known and kids love playing it.

To play, one person is chosen to be “It.” This person kneels in the middle of the trampoline and must wear a blindfold.

The other players spread out around the trampoline and chant:

Come alive by the count of five

Once the players say “five” the person in the middle must try to tag someone. The blindfold must remain intact and the player must remain on his or her knees.

My oldest daughter always plays this with little kids that she babysits. She is the steamroller so she lays flat on the trampoline with her arms against her sides.

The steamroller tries to run into other players who try to avoid being steamrolled by jumping or stepping over and around her.

This game is very similar to flag football. Players tuck a rag or scarf into the back of their waistband to form a “tail.”

Players try to grab each other tails. The winner is the last person who still has their tail when everyone else’s have been taken.

For this game, you’ll need one beach ball for every two players. The idea is that the trampoline is lava but that the players are part lava so they can’t be hurt by it if they keep bouncing.

The balls, however, aren’t as lava proof. They can only withstand quick touches by the partial lava monsters (the players) and can’t survive touching the hot lava (the trampoline surface) at all.

As a parent who wants to find new ways to get the kids outdoors and having fun, a trampoline has been the best investment. Just to let you know, as with any outdoor fun such as these fun trampoline games, adult supervision may be required. Be certain that your trampoline is set up properly and safe for all children who will be enjoying some of the most fun trampoline games ever.