Two weeks ago I posted a list of several different ways you could reuse or repurpose newspaper instead of tossing it in the recycling bin. If you missed it, you can read it here. One of the ideas I found was to make a basket to hold your recyclables from newspaper. I decided to give this project a try to see how hard it would be to make my own newspaper basket.

How To Make A Recycled Newspaper Basket 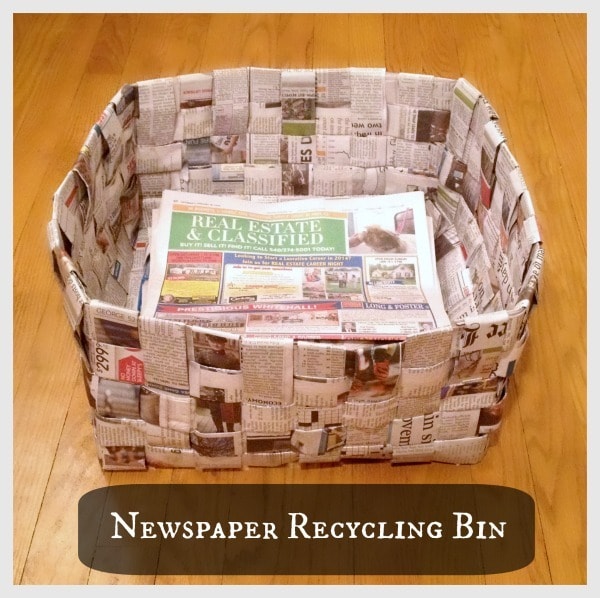 First, I cut all of the two-page sections in half. 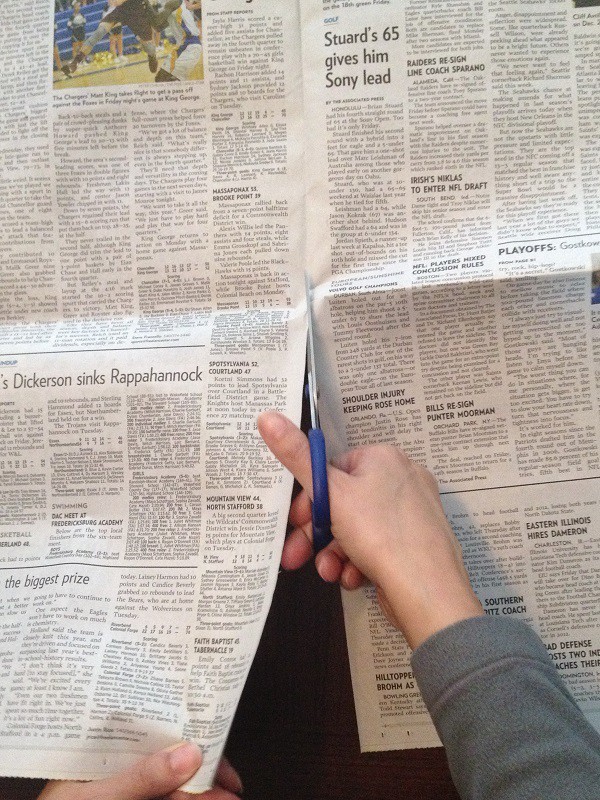 Then, I took each piece of newspaper and folded it half lengthwise. 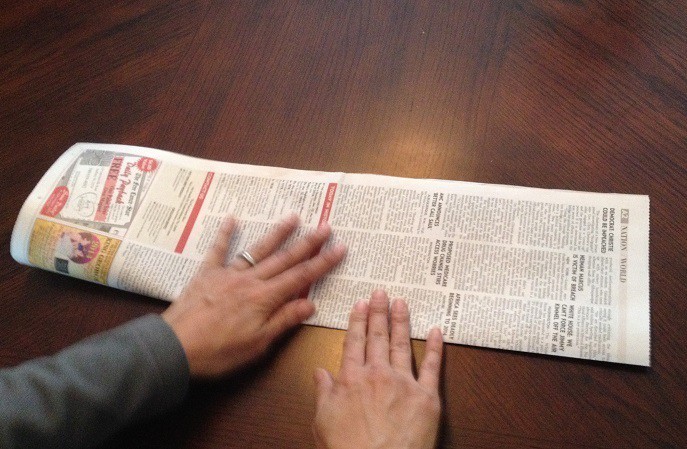 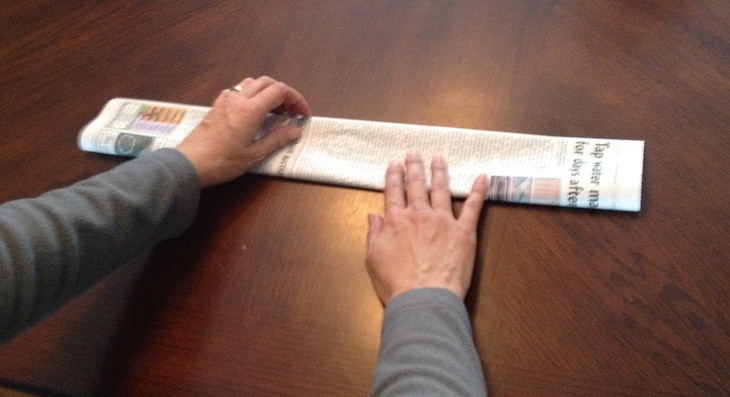 And once more to form a thin strip. Then I laid two strips down in a T-shape. 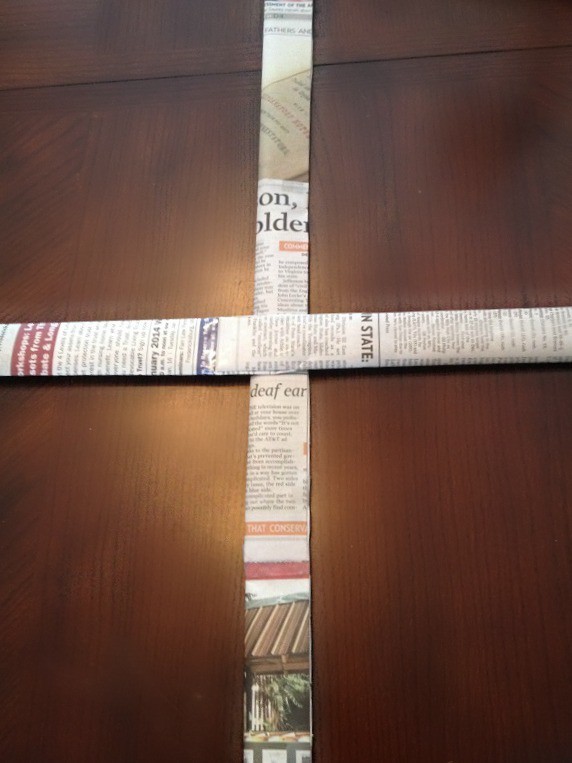 After that, it was just a matter of adding new strips and weaving them together over and under alternately.

After weaving enough strips together to form the basket size I wanted, I made sure to push the strips together and close the gaps in between them that are visible in the picture above.

Next, I creased each of the strips to form the bend where the sides would begin. This part of the process wasn’t exactly picture perfect so I don’t have any photos to share. I basically continued the weave on each of the four sides, then folded the sides up and interwove the strips at the corners. This required extra sets of hands to hold the walls up while I wove.

I folded the vertical strips over the top edges and wove them into the horizontal strips. This is what the basket looked like when I was all done. 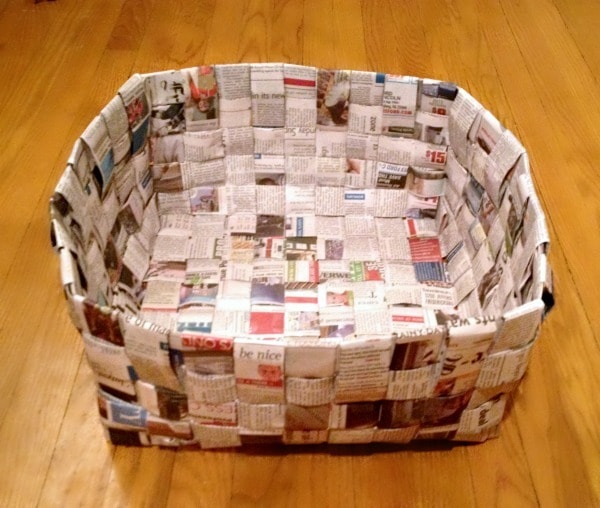 And what better way to use a basket made from newspaper than as a recycling bin for newspapers? 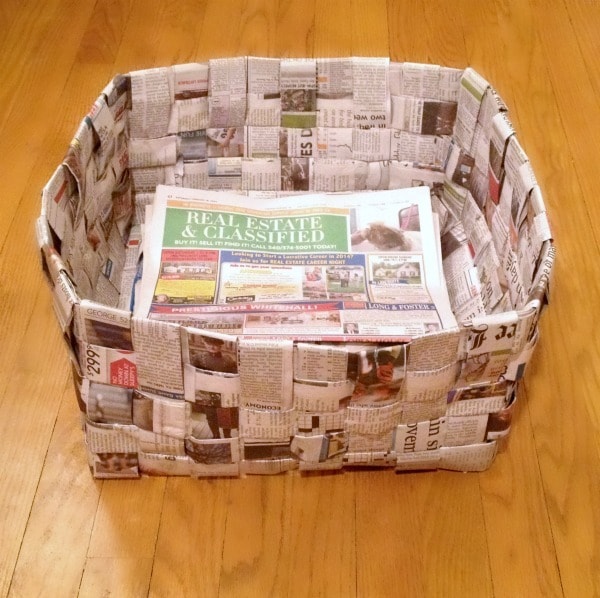 Fun Project To Make With The Kids

This was a fun project and my kids thought it was super cool that we made a basket from newspapers that we normally would have tossed in the recycling bin.

The project took MUCH longer than I expected though. I needed several dozen strips of folded newspaper so that step alone took about half an hour (in my mind it was only going to take 10 minutes).

The weaving was pretty simple, but when it came time to fold up the sides it became a much trickier endeavor and required a great deal of patience.

If I had anticipated the time required for this project in advance (about two hours total), I would have allocated more time for it and paid better attention to details which I think would have resulted in a sturdier, and more symmetrical, basket. So, if you decide to make your own basket, leave yourself plenty of time.