These Sweet Potato Cupcakes make the perfect Fall treat. If you enjoy sweet potato casserole, you’re going to love this cupcake version of that amazing dish!

Fall is my favorite season and these cupcakes remind me of one of my favorite things about Fall — Thanksgiving. Inspired by my favorite dessert-disguised-as-a-side-dish, these perfectly portioned portable treats let you celebrate Thanksgiving any time you want.

How to Make Sweet Potato Cupcakes

In the mixing bowl of a stand mixer, cream together the softened butter, and brown sugar until light and fluffy.

Add eggs, milk, cake mix and Maple syrup to the sweet potato puree mixture bowl and beat until combined and well blended.  Then, blend on high for about 45 seconds.  Scrape down the sides of the mixing bowl, and blend one more time.

Remove the mixing bowl, and with a small ladle, ladle the cake mixture into the muffin cups until they’re about 2/3 full.

Bake for 18 – 22 minutes, or until a toothpick inserted in the center comes out clean.  Remove from oven, and cool on wire racks.

While the cupcakes are cooling; wash out the mixing bowl, and make the frosting.  Place the stick of softened butter in the mixing bowl, along with the Crisco, and Vanilla and Cinnamon, and blend together until smooth and creamy.

Add about half of the powdered sugar, and half of the heavy cream, and mix on low until blended. Add a little more of powdered sugar, and more of the cream until all ingredients have been added.  Stop the mixer and scrape the sides, and blend again on high until the Frosting is thick and smooth.  Place the mixing bowl in refrigerator to chill.

While the frosting is chilling, and the cupcakes are cooling, start the crumble topping by  lining a cookie sheet with parchment paper.

Place the oatmeal, brown sugar, cinnamon and sugar in a large bowl, and pour the melted butter over the topping mixture, and blend well with a large spoon.

Pour the Topping onto the Parchment paper lined cookie sheet, and place in the oven at 400 degrees for about 10 minutes, stirring half way through baking, bake until golden brown.  Remove from oven and set aside to cool.

When the cupcakes are completely cooled, fill a pastry bag with the cinnamon buttercream frosting, and using the large star tip, pipe the frosting onto the cupcakes, starting at the outer edge, and swirling up to a point.

Gently roll the cupcake edges, where the frosting is, in the crumble topping.

Finally, place a browned, melted marshmallow topping on top of the frosting. 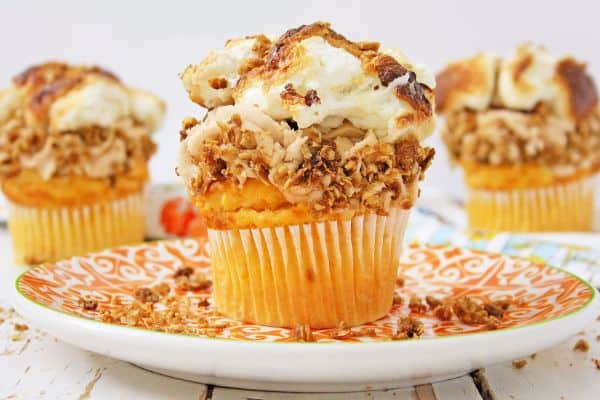 To make the cupcakes:

To make the frosting:

To make the topping:

To assemble the cupcakes

NOTE:  The Marshmallows will still be a little warm when you top the frosting with them,  but that’s okay.  You can pull them a little to get them on the tops of the cupcakes the way you want them.  You can even break them apart and place them on the cupcakes in two pieces if that’s easier for you.  Cupcakes should be kept in the refrigerator in an airtight container.  Cupcakes will keep refrigerated for up to 6 days.
Tried this recipe?Let us know how it was!

If you love this fun sweet potato cupcake recipe, be sure to pin it to your favorite Thanksgiving recipes board on Pinterest so you can find it on the big day!

Follow Me
Latest posts by Corinne Schmitt (see all)
21Shares