Home » What Makes a Home Mid-Century

Home » What Makes a Home Mid-Century

In recent years, mid-century design has seen resurgence in popularity. In addition to the sleek design, people are offered a hint of nostalgia of a time that, to some, seemed simpler. The design movement is most often considered to have been prominent from 1945 through 1965, although design concepts of the late ‘30s are sometimes lumped in along with a few from the late ’60s and early ‘70s. Here is a rundown on what makes a home mid-century. 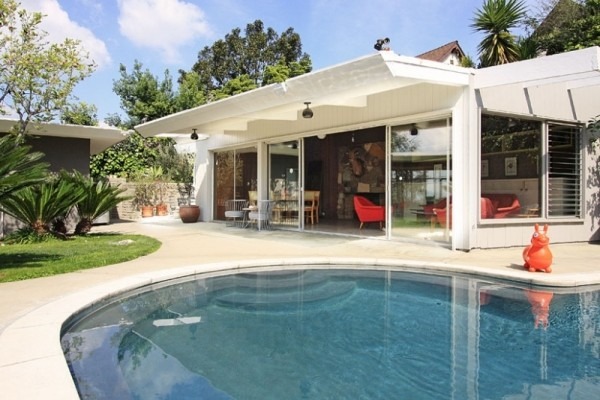 The Mid-Century architectural design included straight, unassuming themes that emphasized long lines and plenty of large windows. The inside offered a smooth flow from one room to another, with an open concept design. Often one-story tract homes, these houses were simple in nature, usually with entryways that transitioned easily between the interior and the yard. The doors were simple with long, clean lines as well as pronounced flat panels, sometimes painted with eye-catching shades. Large, cement pavers often provided pathways through the grass.

The furniture inside a Mid-Century Modern home reflected the style of the house’s exterior. Strong, minimal lines were the norm with ornamental items phased out. The clean designs allowed for items to become multi-purpose, with tables easily interchanged between dining, recreation and accent pieces. Chairs were simple and to the point, allowing them to offer seating with little fanfare. Bright colors weren’t unusual, along with polymorphic designs and geometric shapes that might remind one of a Jetson-esque style. Hi-fi systems became a staple in living rooms as did the peg-legged television consoles.

During the Mid-Century era, casual living became a part of everyday life. It is during this time that the modern home began donning more lifestyle gadgets. Toasters were prominently displayed on the kitchen counters along with mix-masters and other handy appliances. It was during this time that barbecue grills began finding their way into backyards as a mainstream, helping backyard barbecue parties and neighborhood block parties to explode in popularity.

The items used to accessorize a Mid-Century home often added a strong, unexpected pop of color. Geometric motifs might be included, as well as pieces that featured continually repeated shapes such as circles or squares. Accents were created from materials such as fiberglass, wrought iron and steel, as well as plywood and paneling. Clocks with long extensions resembling sunbursts were common along with metal wall art in a similar style. Large graphic prints were also common during this era with travel inspired posters used often as living room wall art.

Simplicity defines the Mid-Century style, but there are plenty of pops that bring it all together. While the architectural appearance of your home is less easily tweaked, there are many interior switches you can make to add a Mid-Century feel.