I am a big fan of young adult (YA) literature. I thoroughly enjoyed the Harry Potter, Twilight, and Hunger Games series. So, I was thrilled when I was given the opportunity to review Hallows Haven. I received a free copy of the e-book in exchange for an honest review. 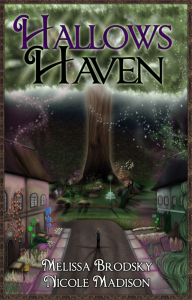 Gwen, a popular and outgoing 16-year old, is being haunted by startlingly realistic nightmares and visions. She soon discovers the cause is related to several long-held family secrets, chief among them that her entire family possesses various magical abilities, including her! In an instance, her life is transformed and she must leave behind everything she knows for an unknown land with new and amazing people and experiences.

In this new land she meets not one, but two, attractive young men who capture her attention. She immediately feels a strong connection to Dylan, though she is confused by his friendship with mean girl Siobhan.  Finn, meanwhile, quickly becomes one of her closest friends though it becomes apparent early on that he is interested in more than friendship.

As Gwen discovers and develops her magical abilities, and continues to struggle with the usual teenaged angst, several comical scenes unfold. The true pull of the book comes from the mystery of Gwen’s family history. As Gwen learns more about her parents and the grandparents who raised her, she is left with more questions than answers. No one seems to be telling her the complete truth, though she knows just enough to know she has the potential to become good OR evil.

The fantastical land of Hallows Haven is imaginative and fun to explore. Gwen’s thoughts, joy, anxiety and frustration are conveyed in such a way that the reader is pulled into the story, pining for answers as well. The twist at the end of the story left this reader in eager anticipation of the next book in the series.

Hallows Haven Is A Good Book For Teens

For those of you who are screening the book for the younger audience for which the book was written, I found it to be quite suitable for teens.

The romantic scenes in the book are more emotional than physical, with a few kisses (I won’t tell you who was kissing!) that are briefly described.

As far as violence, the action scenes within the book are consistent with those in other YA books such as Harry Potter or Percy Jackson.

Gwen, like most teenagers, makes a few questionable decisions to defy her grandparents’ wishes, but the theme of the book celebrates the close relationship between them and Gwen, as a protagonist, is a wonderful role model.

You can purchase your own copy by clicking on the links below:

Two lucky readers will win a free Hallows Haven e-book! Enter below for your chance to be one of the lucky winners.