This is a sponsored post in collaboration with Groupon and Fourstarzz Media. All opinions are my own and honest.

I love to support local businesses, even though it sometimes means spending more. But now Groupon+ has made it possible to shop locally AND earn cash back!

Most people already know Groupon is a great place to find discounts on local attractions, events and a wide selection of products. With the introduction of Groupon+,  you now have even more ways to save money.

This video explains how it works:

Unlike traditional Groupon deals where you buy a deal at a special discount, with Groupon+ you don’t spend any money up front. Instead, when you claim a Groupon+ deal, it’s linked to a Visa or Mastercard on your Groupon account. You aren’t charged anything for claiming a deal.

When you pay using that card at the participating restaurant, you’ll get cash back on your credit card statement.

For those of you who prefer to use a debit card: You can use a Visa or Mastercard debit card, but the transaction must be processed as a credit card charge for you to earn the cashback bonus.

The video above gives a pretty good rundown of Groupon+, but I took some pictures as I went through the process so you’d know what to expect.

Step 2 – Click on any restaurant deal that interests you 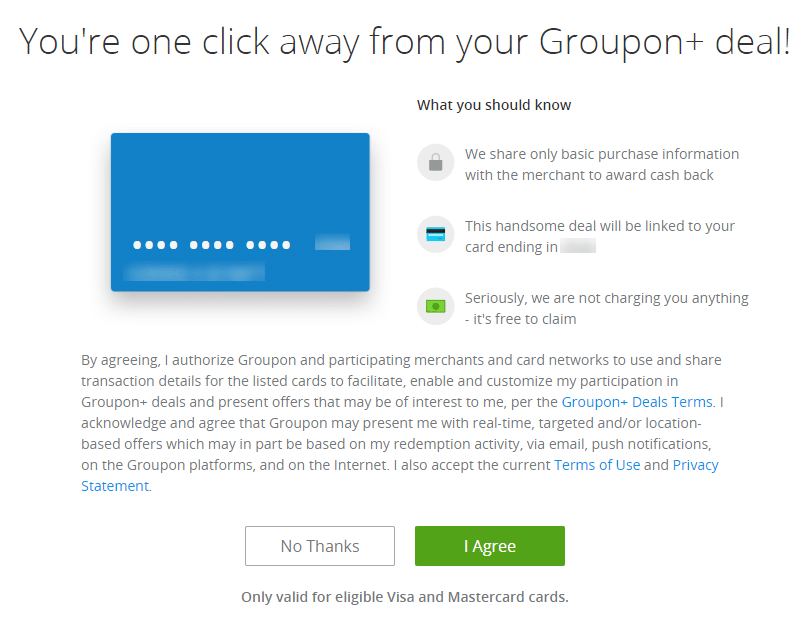 Your card is now linked! As long as you eat at the restaurant before the deal expires and you use the linked credit card, you’ll receive the cash back.

You can see which deals you’ve claimed and when they expire by clicking on your name in the upper right-hand corner of the screen when you’re logged in. 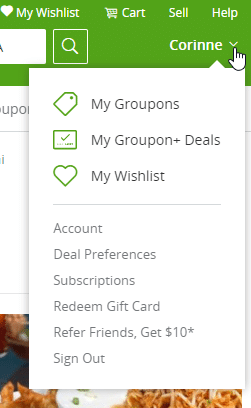 Just click on “My Groupon+ Deals” to see which ones you’ve claimed and which card they’re linked to.

Aside from the obvious fact that like most people, I like to save money, there are a few other features of Groupon+ that I’m super excited about.

No Forgotten Vouchers or Coupons

Two years ago for my birthday, my family bought me a Groupon deal for a local wine tour. The voucher got buried in a pile of coupons and then thrown away. I forgot all about it until my next birthday after it had expired.

With Groupon+, there’s nothing to lose or forget! You claim the deal to link your card to a restaurant, but you don’t spend anything until you actually go to the restaurant.

Saving on the Sly

I love saving money but I don’t necessarily love being THAT lady that carries around a coupon binder. I like to be money wise but not come off stingy or as a neurotic spendthrift.

With Groupon+, no one knows you’re saving money but you! You’re simply enjoying a nice meal out and paying with your credit card like everyone else. But, you’re getting a nice cash back bonus behind the scenes.

One of the best features of Groupon+ deals (in my opinion) is that you can use them over and over again without having to re-claim the deal. So, if want of your favorite restaurants shows up on Groupon+, you can save on every meal you eat there until the deal expires.